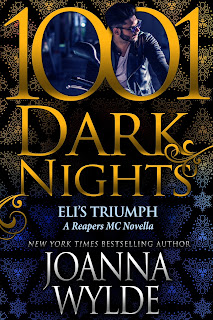 Joanna Wylde's latest addition to the roster of novellas in her highly popular Reapers MC series is now out and it's an enemies-to-lovers romance between two people who grew up together and have an affinity for pushing each other's buttons. From the moment five-year-old Peaches Taylor was forced to not only share her bedroom but the attention and affection of the man she considered the closest thing to a father, she disliked Gus's seven-year-old nephew, Eli King. The boy had nowhere to go, but to a child like Peaches, Eli was nothing more than a nuisance and an obstacle. Through the years, the tension between them has grown, only this time, it includes the sexual kind. When ownership of Starkwood Saloon is up for grabs between the now-twenty-nine-year-old Peaches and thirty-one-year-old Eli, tensions may finally boil over, and when they do, there will be no going back for either of them.

If I had to choose just one trope among the many that I enjoy reading, it would have to be enemies-to-lovers and Joanna Wylde did a bang-up job with Peaches and Eli's story. These two pushed and prodded, and they could easily have been the poster children for button pushing. But there was a whole lot of underlying stuff going on, thanks to some not-so-hateful feelings having developed over the years. Yeah, they may have bordered on the immature at times as adults, but hey, I know all about reverting to petty behavior even at my age, so who am I to judge? The bickering was highly entertaining and the sexual tension between these two was off the charts. After having read this novella, I'm very much tempted to re-read the entire Reapers MC series especially with the reappearance of several past characters. Fingers crossed readers haven't seen the last of this series. Eli's Triumph snags four stars. ♥