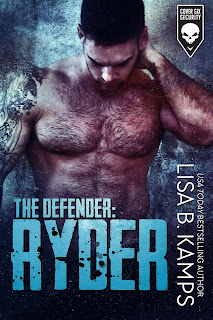 Three books in and Lisa B. Kamps's Cover Six Security series continues to offer up entertaining romantic suspense fare. The Defender: Ryder is the third novel and it uses the falling-for-your-sibling's-best-friend trope to give a good story about Ryder Hess--aka Boomer--and Hannah Montgomery. Ryder has never struggled to find a woman to be with but becoming more deeply involved and committed is something he's just not into, and he's pretty much got his sister's best friend to thank for that. It's been more than a decade than since he walked away and joined the army, leaving Hannah behind nursing a broken heart. They've moved on, with Ryder becoming an Army Ranger with an expertise in demolitions and Hannah turning to volunteerism and humanitarian efforts. When Ryder's sister, Allison, sends an SOS his way, there's no way he can refuse her. He's prepared to do whatever is necessary to make sure she's okay, but what he isn't quite ready for is being stuck with Hannah on an island, especially since it's clear she isn't all that thrilled to see him again. Does the danger lie in potential heartbreak or with unseen threats?

Lisa B. Kamps maintains her momentum with book number three in this series, providing a fair amount of romance and suspense all throughout, with some great tension between the main characters and the circumstances they find themselves in. Along with this being a best-friend's-sibling sort of romance, this is also a story of second chances given that Hannah and Ryder were once romantically involved. I liked that these two struggled with having to be around each other, that it wasn't this immediate sort of rekindling of feelings. It may sound strange and all, but I do prefer the main characters in the romance books I read to work for that happy ending of theirs. It just makes the whole reading experience come off as more worthwhile. As for the action and suspense, well, I certainly have no complaints when it comes to that particular aspect of the story. The pacing and development were nicely done, and Kamps does a good job keeping the main focus on Hannah and Ryder while also stirring up some notable chemistry between two side characters who I hope will be in book four. Four stars for The Defender: Ryder. ♥

Learn more about Lisa B. Kamps.