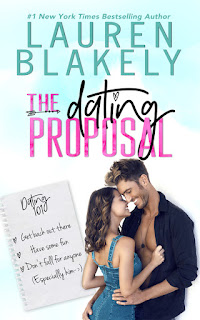 I may not have read its original incarnation--Trophy Husband--but it doesn't really matter because The Dating Proposal was every bit the amazing read I expected it to be. Lauren Blakely's story of two strangers who become friends and ultimately much more was romantic comedy gold and a great way for me to spend a couple or so hours this past weekend. If you've never read anything by this bestselling author and are curious about her writing, I'm going to highly encourage you to take advantage of the fact that this book is currently available for less than a dollar on Amazon (or if you're a Kindle Unlimited user, you can find it there as well), and get reading already! Now, if you're already a fan of Blakely's, then you'll be happy to know that there were a number of familiar supporting characters here who have already gotten their own happily-ever-afters in her past releases, but I'm not saying who!

It's been a year since fashion blogger McKenna Bell was dumped by her fiancé the day before their wedding via voicemail, and she has no plans of wallowing. She's celebrating the fact that she feels absolutely nothing anymore for her ex, and she's even snagged herself a date to boot! It's all about having fun and letting loose. She's certainly not looking for a relationship, but when her friend's evil cat's antics lead to her portable hard drive going kaput, McKenna finds herself looking for someone to fix the damage done. Enter Chris McCormick, a gorgeous guy who looks more like a surfing god than a geeky whiz but then he turns out to be both. When Chris invites McKenna to be a guest dating adviser on his show on WebFlix, she happily accepts. The two realize they've got a whole lot in common, including having trust issues. They become friends--albeit friends who flirt. Could they become far more?

I've yet to read (or listen!) to a Lauren Blakely book and not be entertained. There's very little angst in this latest release of hers, making for the sort of lighthearted romance that'll tempt you to curl up with it and want to get to know Chris and McKenna better. Now, I know that this is a re-release of sorts, but Blakely does not that most of the story has been re-imagined and I've yet to read a review that states that The Dating Proposal is simply a rehash of Trophy Husband. I loved that Chris and McKenna embraced that side of them that made them quintessentially them without apologies. Their relationship really went from zero to so much more and that they got to know one another at the same time that readers got to know them. The cameo appearances of past characters that I was familiar with was a fun bonus, and I hope we haven't seen the last of this crew. Five stars for The Dating Proposal! ♥

Purchase The Dating Proposal on Amazon.