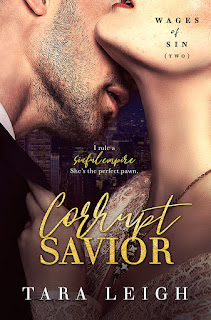 “No way will I become some soft-spined, weak-willed damsel in distress, hoping and wallowing and waiting for my dark knight to rescue me. To hell with that. I’m going to rescue myself.”

Where the second book in a trilogy usually falters compared to the first and last books, when it comes to duets, there can be no hit or miss going on with the second book. The third book in a trilogy can allow the entire thing to bounce back if the second one turns out to be middling at best. With duets, both books need to be at the top of their game, and while Cruel Sanctuary set the bar impossibly high, Corrupt Savior didn't merely put in a valiant effort--it was truly amazing and wrapped up the story of Damon King and Aislinn Granville really well, making the Wages of Sin duet my favorite from Tara Leigh and a possible contender for one of my favorite duologies this year.

Corrupt Savior picks up where Cruel Sanctuary left off, with both Damon King and Aislinn Granville coming to grips with the fact that she's been taken and he has no idea who's behind it. With time ticking, Aislinn knows that she cannot allow herself to lose faith in either Damon or herself. She believes that he's desperately trying to find her, but she also comes to grips with the fact that she may need to save herself, and she's no sniveling damsel in distress waiting for her knight in tarnished armor to come swooping in. When all has been said and done and everything has been revealed, what will become of the dark king and the only woman he'd want to be his queen?

Fast-paced and never skimping on the twists and turns, Corrupt Savior was everything that I could have hoped for. Tara Leigh did not disappoint, not when she has her two main characters evolving into better versions of themselves and becoming the sort of couple that could truly reign supreme. There are things I never saw coming story-wise, and when an author is able to take me by surprise, they more than deserve my kudos and appreciation. While Damon and Aislinn's story may have wrapped up, I have high hopes that we haven't seen the last of one particular twosome--cough, Finley Byrne and Sebastián Cruz, cough--and possibly more revelations. Five-plus stars! ♥

Read my reviews for the Wages of Sin series: