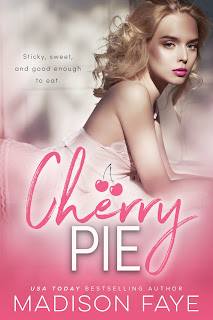 Madison Faye was one of those authors that I had heard quite a bit about but had yet to try, so when I heard that she had an upcoming release, it was obvious that the time had finally come for me to dive into my first read from her. Cherry Pie is a taboo May-December romance, and as the title hints at, the female main character is a virgin with the twist being that she's put her virginity up for auction. The highest bidder, however, turns out to be none other than her best friend's oh-so-hot, very much single, and way more than twice her age multi-millionaire father.

Marshall Bane leads a pretty charmed life. He's forty-two and served his country before entering the world of finance and continuously making a whole lot of money for himself and his company's clients. He has a wonderful daughter who's getting ready to head off to college, and she's always been his top priority. When he finally decides to indulge himself, he ends up bidding on an anonymous twenty-year-old girl's virginity, and naturally, he wins. He just never expected the virgin he's been fantasizing up to be his daughter's eighteen-year-old stunning best friend.

Desperate times call for desperate measures, and with eighteen-year-old Kendall Shaw focused on getting her college education, she sells her virginity for one million dollars--the highest bid made during an auction. It comes as a shock when she and her best friend's dad learn that they're tied together by said auction. Mr. B--Marshall Bane--tries to do the right thing by walking away from the deal and merely giving Kendall the money, but he's the one guy that Kendall has always fantasized about and she's going to make sure he has his cherry pie and eat it, too.

Cherry Pie was everything I was expecting it to be and then some. It had heat but it also had a great deal of heart to it, with an honest-to-goodness romance between Marshall and Kendall. There wasn't a whole lot of angst, but in a way, I liked that it didn't take the usual route and made this a story that didn't have drama where you'd expect it to be, but it still had a bit of it elsewhere. I'm going to leave it at that because, hello, spoilers! Suffice it to say that this was a fun read, one that tickled my fancy and provided about an hour and a half or so of enjoyment. 4.5 stars. ♥