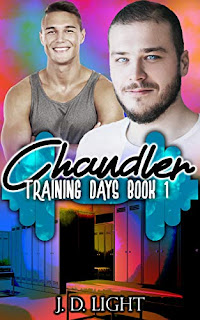 Chandler is the first book in J.D. Light's Training Days series, and this quick read was a sweet romance that takes on the falling-for-your-sibling's-best-friend trope rather nicely. When Chandler Bell's boyfriend ends things between them because he can't stand seeing Chandler's naked body, it pings all of Chandler's insecurities regarding his less than buff bod. The one place he knows he can find support and solace--and what he believes is some much needed shaping up--is his uncle's gym. It's there where almost all his favorite people are at--from his uncle and older brother to the staff. His most favorite person, however, is none other than Baker Storm, professional trainer, his brother's best friend, and the straight guy that Chandler's had a crush on for years. Baker thinks Chandler is perfect just the way he is. He also knows for a fact that he's nowhere near perfect for his best friend's younger brother, so he's happy to have Chandler in his life as a friend, even though he wishes they could be more. Both men think they aren't what the other wants or needs, but maybe the time's come for certain truths to come out...

I adored everything about this book. From the fun cast of characters to the lighthearted story, I absolutely enjoyed every single minute I spent reading this. One of my favorite things was the honest-to-goodness unabashed affection that Chandler and Baker had for each other even prior to them becoming romantically involved. Maybe it was due to the fact that they had secret crushes on each other, but it was clear that they were two people who had no qualms showing those they cared about how they felt with embraces and other physical expressions of affection. One of my takeaways from the book was that we have to be comfortable with our own truths and in our own skin. Chandler's insecurities had to do with his physical appearance while Baker's worries were more about his worthiness as an intellectual equal to the guy of his dreams, and this highlights that what some may consider lacking is actually more than adequate to others. This book was my first read from J.D. Light and it's a series starter, but now I'm hooked and I can't wait to read the next one to be released. Chandler snags 4.5 stars out of five stars. ♥