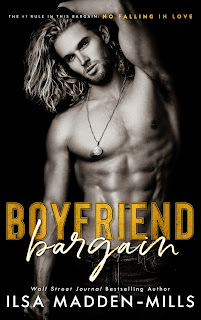 “I'm sorry, so goddamn sorry I couldn't come to you sooner and didn't tell you the moment I knew I should have. I was just so scared. I tremble at the idea of you rejecting me because I've never felt this way about anyone in my whole fucking life, and I know I'm fucked up and I need help and I know you get me. You get me, and I can't live without you. I can't.”

When I started reading Boyfriend Bargain, all I was hoping for was a good read that would leave me satisfied by the time I got to the end, which is basically what I hope for in all the books I read. I know what to expect when it comes to Ilsa Madden-Mills's writing, and she's never disappointed me. What I ended up getting, however, with her latest release was an unexpected gem of a read that had me so damn invested in all things Zack Morgan and Sugar Ryan. This book was everything I didn't know I needed, and the one thing it did leave me wanting for was more from the supporting characters who had the potential to be main characters. In short, I'm really, really, REALLY hoping Boyfriend Bargain was just the first in an upcoming series. Yes, maybe, please, Ilsa Madden-Mills?

College senior Sugar Ryan wouldn't call what she's doing "stalking" per se; it's more of...reconnaissance to better prepare her to approach her prey, erm, target: fellow senior and hockey team captain Zack Morgan. After being wait-listed by the law school of her choice, Sugar thinks her best move would be asking Zack to pretend to be her boyfriend since the dean of admissions is a die-hard fan of the NHL team that's drafted Zack. The fact that Zack is drawn to her could be a bonus...or not, especially since the number rule Sugar insists upon in the whole boyfriend bargain is that there will be no falling in love. It should be easy enough. After all, he's not exactly known for being a guy into relationships, what with a nickname like "Heartbreaker". But Sugar is the first girl in years that Zack's become this attached to, and he wants the real thing with her. The question is: Can she show him he deserves it?

I absolutely adored every single thing about this book. From Zack and Sugar and those closest to them to the story that they had to tell. The direction that their tale took had its share of surprises, and while there were moments throughout that brought a smile to my face and even had me laughing a number of times, there were also times where I could feel my heart beating faster when things got intense. These two clearly had their respective sets of emotional baggage to contend with and while it would be easy to compare and say one had heavier stuff to deal with than the other, it was as if being in each other's lives became the turning point that provided them with a clearer perspective in order to truly move forward. Inasmuch as I loved Zack and Sugar's story, I've got each of my fingers and toes crossed that we haven't seen the last of Zack's brother and all of their noteworthy friends. My curiosity's been piqued and now I'm itching to not only get to know them better but for every single one of them to get their own happy endings. I'm demanding and desperate! Boyfriend Bargain is a five-plus-starred must-read. ♥