Review: Beauty in the Broken by Charmaine Pauls (Diamond Magnate #1) 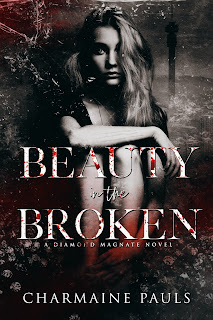 When he was twenty-two, Damian Hart was a young man who had a dream, but after being framed for a crime he didn't commit and languishing in prison for six years, the shine has definitely worn off even if he does wear a thousand-dollar suit well. He lived a nightmare behind bars but it's made him into the man he is today, and that man is one who's bent on revenge and he's come demanding payment. He's not after Harold Dalton's assets, however; oh no, what Damian wants to lay claim upon is the man's daughter. Angelina Dalton-Clarke is a widow considered to be the wealthiest one in the country. She lost her husband by his own hand, but news of her being a troubled soul were rampant even before he took his life. Damian and Lina met right before Damian's life unraveled, and she's been the constant while he was in prison. He has plans for her, and it begins with taking her as his wife.

Charmaine Pauls was a new-to-me author before I started reading Beauty in the Broken, which is the first in her Diamond Magnate series but it does end rather happily and has no cliffhangers for readers to fret about. This book was, indeed, one heck of introduction to Pauls's writing. This was dark, but not the sort of dark that leaves you with nightmares. This isn't a feel-good kind of romance that starts off with a meet-cute and then followed by "le sigh" moments. Nope, Damian and Lina's story is based on vengeance but it isn't your typical forced marriage sort of deal. A whole lot of unexpected twists and turns are in this novel, and while it's a lengthy read, you're in for a treat because of the fantastic writing found from cover to cover. Neither Damian nor Lina are your stereotypical sort of main characters, and that's just one of the many things that make Beauty in the Broken a five-starred read. ♥