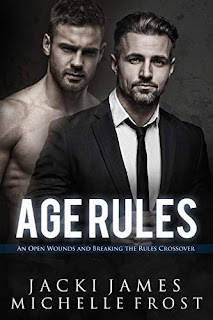 Age Rules is a crossover novel by Jacki James and Michelle Frost and is the fifth book in James's Breaking the Rules series and the fourth one in Frost's Open Wounds series. While I've read--and adore!--the latter, this new book is my first read from James, and now I'm all curious about the supporting characters who were featured here from the former. That being said, this book can, indeed, be read as standalone, but if you're like me, you may end up wanting to read whichever series you've missed on. Curiously enough, it felt like there were more Breaking the Rules recurring characters here than those from Open Wounds, or at least that's how it looked to me considering I wasn't familiar with a lot of the guys mentioned here, recognizing only Rory Wilson, Theo Smith, and the Rourkes.

This is a May-December romance between twenty-six-year-old promising MMA fighter Andre Harrison and forty-six-year-old hospital president and CEO and former Navy man Darren Davis. When Andre's father suffers a heart attack, he flies from Cincinnati, Ohio to Austin, Texas in order to be by the man's side even though he wonders if it'll be appreciated by the gruff man who only seems to zero in on Andre's shortcomings. Andre and Darren have an immediate awareness of each other, but as attracted as Darren may be, the twenty-year age difference, Andre's being in the closet, and the physical distance they'll be in have him wary. The younger man wishes he could be out in the open like Darren, but his career is just taking off.  The odds may be stacked, but will either one fold or fight?

There was some angst in this read, but nothing overly heavy. making for an overall light read about two men who fall in love with each other and need to decide whether what they have is worth making a stand for. Both Darren and Andre were main characters who were easy to like and their romance was fairly easygoing save for the issues they had listed in both of their heads. I'm not entirely sure how the two authors split writing duties, although I'm guessing Jacki James did Darren's POV and Michelle Frost wrote Andre's POV, but I could be totally wrong. That being said, the combination of these two authors worked quite well given that I couldn't tell when their was a shift in writing. With a strong story and connected characters, James and Frost win with Age Rules, which gets 4.5 stars. ♥