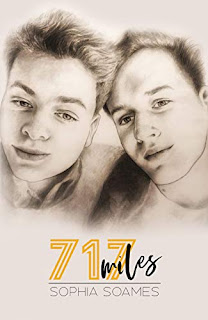 717 Miles is my second read from Sophia Soames and this second release of hers has shown me that she isn't a "one-hit wonder". The author does provide trigger warnings for this book, namely severe bullying, and notes that the story is set in the United Kingdom where the age of consent is sixteen. All that being said, this is yet another must-read, and it reiterates that Soames is an author that fans and readers of M/M romances should keep their eye on because not only does she have beautiful stories to tell but she writes them impeccably well, with an almost poetic touch to them, and her characters are worth getting to know.

Nineteen-year-old Adam Vik Solheim was supposed to be basking in the sunshine on the beaches of Bali, Indonesia. Instead, he finds himself flying 717 miles from Oslo, Norway to London, England to play nanny to a seventeen-year-old named Felix Haugland. As much as Felix is trying to endure his last three weeks of school, the last thing he needs is someone just a couple of years older hovering over him because his mom is worried about him. Felix's life is already complicated as it is, and having Adam the au pair from Norway around basically ensures that nothing is going to go back to being simple anytime soon. What neither of them ever expected was to find love, but how will it work out with the distance and their dark histories?

If you're in the market for a new author, I highly recommend you give Sophia Soames a whirl. She left me very much impressed with her debut, Little Harbour, and now she's shown that she can write a coming-of-age romance just as well as she did one involving older characters. I loved the connection between Adam and Felix. Their relationship came off as organic and the development was one that I would consider to be well-paced and more than believable. While a heavier read that tackles serious topics like bullying, Soames handled these with sensitivity yet doesn't shy away either. Let me reiterate that there is rather severe bullying in this story, so if this is a known or potential trigger, I suggest that you skip the book even if it is as well-written as it is. If you appreciate worthwhile love stories, 717 Miles could be just the thing. Five stars. ♥