Release Blitz: Made for You by Anyta Sunday 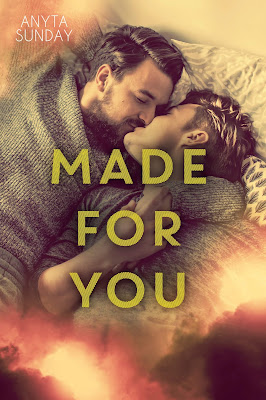 About Made for You
Ben wants to find a new home.

Twenty-four-year-old Ben McCormick is the primary caregiver for his brother Milo after their parent’s death. A year into the job, he’s totally got the hang of it. Mostly. Sort of. Not at all?

Defeated and thoroughly chastised for his lack in parenting skills at teacher-parent night, Ben slumps away with the resolve to finally get his life sorted: be a better role model, and sell their parents’ house for a fresh start.
But first, he needs to spruce up his house to hit the market. He’s no DIY king, but Milo’s hot-as-hell woodwork teacher is…

Thirty-nine-year-old Jack Pecker is waiting for the home of his dreams to come on the market in the summer. What better way to wait the interim months than working on a small renovation gig?

Only trouble is, the gig is for the McCormick brothers. And working in close quarters to red-haired Ben McCormick won’t be easy. Not with the attraction that simmers between them. Attraction Ben makes no effort to hide.
But Jack’s professional. Dating a parent is highly discouraged at Kresley Intermediate, and he’d never cross the lines…

Ben and Jack. Two guys searching for a home – a home that might just be where their hearts lead them.

Set in New Zealand, Made for You (Love & Family #2) is an MM gay romance featuring two guys at very different places in their lives – but both finding out they are looking for the same thing.

Can be read as a standalone.

Read my five-starred review of Made for You.

Add Made for You on Goodreads.

An Excerpt from Made for You
When I return, Milo has turned around, finally facing Ben. “I don’t want you to sell the house.”

“Look, it won’t happen immediately. But it will happen.”

“Not got the memo yet, bucko? Life isn’t fair.”

They stare at each other. I don’t want to break their moment, but a twig snaps underfoot.

Milo spots me and his body jerks with surprise. “Mr. Woodpecker?”

I cut Ben a look, and he pauses to smirk before turning his chin toward Milo. I think he might tell him to cut that shit out.

I’m close to putting an end to this stand-off and barking orders. If Milo were my kid, I’d have his ass in bed by now, no media for a fortnight.

Ben reads my face and his expression shutters. “Fuck. We’re pissing off your teacher. How much will it take to get you down?”

He pulls a wallet from his back pocket.

This is not actually happening. Ben’s parenting is unorthodox at best.

“Thirty-five, and not a dollar less.”

“Fifteen, and you shower before bed.”

Milo leans over the edge and reins in his shout. “Do I have to do my hair?”

Ben looks like he’s about to give into a frustrated laugh. The poor guy is damp and muddy and miserable, and Milo needs to quit it.

I catch Milo’s gaze and hold it. It might not be my place, but I have to do something for Ben. My voice is steady and commanding. “Get your butt down here, boy. Or I’ll have you cleaning the class bins all week.”

“Fine. Fifteen bucks. I’ll do my hair.” He lowers a ladder and I brace the shitty thing as he climbs down.

Ben crowds close behind me, a block of warmth at my back. He lets out a breathy ‘thank fuck’ at my nape that feels a lot like brushing up against an electric line that definitely shouldn’t be crossed. 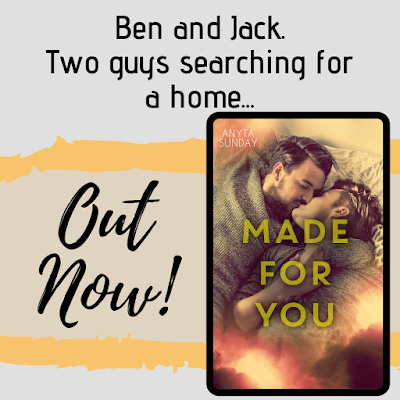 About Anyta Sunday
A bit about me: I'm a big, BIG fan of slow-burn romances. I love to read and write stories with characters who slowly fall in love.

Some of my favorite tropes to read and write are: Enemies to Lovers, Friends to Lovers, Clueless Guys, Bisexual, Pansexual, Demisexual, Oblivious MCs, Everyone (Else) Can See It, Slow Burn, Love Has No Boundaries.

My books have been translated into German, Italian, French, Spanish, and Thai.