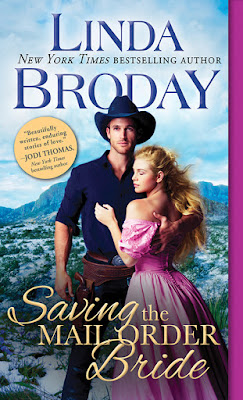 About Saving the Mail Order Bride
When the West was wild
And man's law favored the few
These extraordinary women could be found...
...in the heart of an outlaw.

He may be a wanted man, but all outlaw Jack Bowdre ever desired was a second chance. Now he's on his way to jail, completely unaware that his unexpected—and unexpectedly beautiful—traveling companion is none other than Nora Kane...his mail order bride.

It's too bad Nora doesn't know Jack is her groom-to-be. All she sees is a scoundrel. But when their stagecoach crashes and the truth comes spilling out, they're suddenly left to fend for themselves—and each other. The longer they're together, the stronger their feelings grow. Hounded by desperate men bent on doing them harm, Nora and Jack will do whatever it takes to find their happily ever after...but first, they'll have to shake the devil from their trail.

An Excerpt from Saving the Mail Order Bride
For Nora there were lots worse things than being shackled to Jack Bowdre. Why she trusted this outlaw was hard to explain yet instinct told her he wasn’t a threat—not to her. She gave Jack’s rugged profile a sideways glance. He seemed deep in thought the way he stared into the distance.

Maybe how to get rid of her?

Panic swept up her spine. What if he got their handcuffs unlocked and left? How would she survive?

He rose. “I need to find a good rock so I can break this chain. I had planned to shoot out one of the links, but without bullets, the gun is useless.”

“You can break these iron links apart with a rock?”

“Can’t you use the butt of the Colt?” That sounded logical to her.

“That’ll damage it and it won’t fire.” He said that like it was something everyone should know.

“But we have no cartridges so why keep something that doesn’t work?” Lord help this poor outlaw.

Jack stopped and stared as though she’d suggested he gnaw through the iron links with his bare teeth. He inhaled a slow breath and seemed to be…counting? “Even if a gun has no ammunition, it still has plenty of worth. If someone corners us, I can still point it at someone. I’m very good at making men believe they’re about to die.”

“Oh. I guess that’s why you’re the outlaw and I’m…a bride you kept secrets from.”

The way color flooded his face said he didn’t appreciate her remark. “Over there.” He pointed to a group of rocks that seemed to have been stacked on purpose.

She allowed him to pull her along, and he chose a hefty one, about nine by six inches. Although he had very large palms, she still had no idea how he’d lift the makeshift sledgehammer and slam it onto the chain with one hand. But with his inability to accept criticism, she thought it prudent to hold her tongue.

Stretching the six-inch chain across a boulder, Jack lifted the rock. The mighty blow jarred her, sending vibrating waves along the chain and stinging her wrist. Plus, the impact didn’t even put the slightest dent in the iron. He slipped his free arm out of the duster sleeve and tried again. Nothing. He unbuttoned his shirt, tugging at the collar, and Nora sucked in a breath at the sight of that broad chest with rippling muscles.

To run her hands over that. She’d always assumed men who lived by the gun would be too thin, too pale, their bodies too…standard. After all, what work did an outlaw do other than ride his horse and shoot?

Apparently, Jack did physical work of some kind. She tried not to stare, but her eyes refused to obey.

Over and over he pounded the chain and with each strike, she flinched, dodging the flying chips of stone. Sweat poured off him despite the cool day. Frustrated curses slipped from his mouth, although he restrained himself far better than she expected.

“I have a hairpin if you want to try picking the locks.” That idea made more sense to her.

“I’ll get this in a minute. It’s stubborn, that’s all. I have to hit it just right.”

The sun rose higher, he kept working until the rock finally broke in half…but the chain held.

He met her gaze. “Failure is just the opportunity to begin again. We’re not licked.”

“Hurry.” Jack took her hand and led her down into a ravine, where they flattened against the side. “Don’t make a sound.”

Her heart hammered in her ears. Or was that his heartbeat? He put his free arm around her and pulled her against all that brawn. The scent of the wild Texas land melded with leather and manly sweat, and Nora could do nothing but sag against him as limp as warm jelly.

His mouth was mere inches from hers.

Perspiration trickled between her breasts, and she could barely draw a shaky breath into her lungs. No one had a right to be so rugged, so enticing, so…so sensual.

What would it be like to feel his lips on hers? Her pulse raced.

He shifted a little, knitting his brows, frowning down at her. Shoot! Had she spoken aloud?

The empty Colt tucked in his waist pressed into the area above her belly, reminding her they were in grave danger. In truth, she was having trouble forming a complete thought.

The hoofbeats became louder until the rider was right above them. The horse snorted with impatience. Other than the horse, all was silent.

Good. That meant only one person, not a whole posse.

Jack removed his hat, gripped the empty gun, and took a look. The suspense proved too much for Nora. She raised on tiptoe to peek and froze.

The horseman was the man she’d caught following her in Fort Worth. The white of her discarded bustle bulged from his saddlebag.

She ducked, pressing the trembling length of her body tightly against Jack. How could the tracker have found her? If he’d seen the stagecoach wreck, he’d put two and two together.

Jack’s hard gaze followed the man as he rode on. “Who was that? You recognized him.”

Careful. The lies would pile up on top of each other until she couldn’t keep them straight.

Her eyes widened. “No one here in Texas would have absolutely any interest in me. I came to marry you, Jack, and I have to say it’s been a rather arduous trip. If I could just go back to the moment when I snapped the marshal’s handcuff on me and threw the key I would.”

She smiled brightly, refusing to let the outlaw’s dark scowl worry her.

“We’ll have to talk about the marrying part, Nora.” 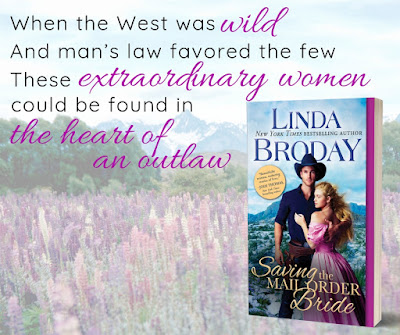