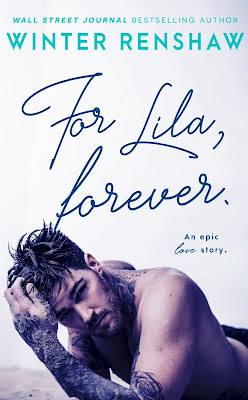 About For Lila, Forever
The words “For Lila, forever” adorned the front of the envelope in blue ink, the handwriting all too familiar. But it didn’t matter what it said. I didn’t have the heart to open it.

We couldn’t be together.

Leaving Rose Crossing, Maine was one of the most painful moments of my life—or at least it was until the day I came face-to-face with Thayer Ainsworth again.

After a decade of searching, he’s found me, and he wants to know why I quit my housemaid job and left his family’s island estate without so much as a goodbye. But I’m bound by a devastating secret much bigger than the two of us, and telling him the truth has consequences.

Looking into the eyes of the only man I’ve ever loved, I tell him the only thing I’m allowed to: never contact me again. And when he’s gone, I sit down and finally open his letter.

Only it isn’t a letter at all. 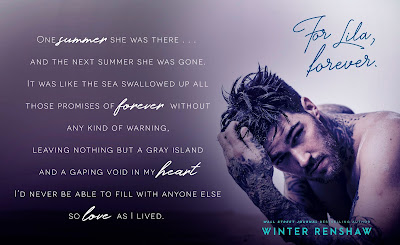 Read my 4.5-starred review of For Lila, Forever.

Add For Lila, Forever on Goodreads. 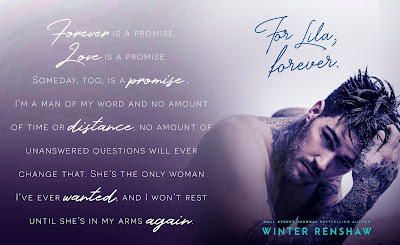 An Excerpt from For Lila, Forever
“What are you doing in here?” he asks.

I rise from the bed and slide my hands in the back pockets of my cutoff shorts. “I just needed a minute to myself.”

“There are just so many people … everywhere ...” I continue.

“I’m sorry.” He lifts a hand. “That’s a horrible question and I shouldn’t have asked. Obviously you’re not okay. I mean. You’re okay. But you've been through a lot. And … I’m going to shut up now.”

He smiles his perfect, straight, bright white smile and it instantly makes me reciprocate, almost like I have no control over my facial expressions. But it doesn’t stick for long.

“I saw you heading west after breakfast this morning. There’s really nothing on this side of the island except this cottage.”

“Oh. So you came looking for me? Like on purpose?”

He laughs under his breath, an easy, relaxed sort of chuff, like he finds my question adorable.

“I guess so,” he says. “Yeah. Guess I wanted to make sure you didn’t get lost or anything.”

“Appreciate it.” I don’t buy it for one second. “I should probably get back. It’s almost time to prep lunch.”

I squeeze through the doorway and make my way down the hall when I hear him say my name. Nothing else. Just … Lila. Turning back, I see he’s standing still, feet planted, in no rush to go anywhere.

“If you ever want to talk ...” he clears his throat. “I’m sure you miss your friends. And I know you’re going through a lot right now ...”

There’s a gentleness about him, an easiness that I didn’t anticipate. It’s in the smoothness of his voice, the way his eyes crinkle when he smiles. He never talks about himself—even during meals. He’s always asking everyone else what they’re doing or what’s going on in their lives. And it’s plain to see he’s the clear favorite among the three grandchildren. He’s the apple of Howard Bertram’s eye.

So far … he seems like a nice guy—a good person.

I almost wish he wasn’t.

I almost wish he fulfilled every stereotype I conjured up about someone with his name and his background and his family and his privileges.

But now all I feel is guilt and an onset of extreme self-awareness, suddenly second-guessing the placement of my hands or the puffiness of my eyes.

“Does this house have a name?” I ask, changing the subject because I feel another wave of emotions about to wash over me when I think too hard about his unexpected kindness.

“You know. Like your house is The Ainsworth,” I say. “And Grandma and Grandpa’s house is The Hilliard. What do you call this one?”

Thayer shrugs before shaking his head. “Nothing. I guess we mostly pretend it doesn’t exist.”

His on-the-spot honesty makes me respect him that much more.

“Back home, my mom had this friend, and she was always talking about how everything had a soul. People, animals, plants, even inanimate objects. Mom said even if that isn’t true, it doesn’t hurt to treat everything with respect, like it has feelings. I thought they were out of their minds, but I guess a little bit of them rubbed off on me.”

“You think the house’s feelings are hurt?” He scratches at his temple.

“Maybe. Sort of. So what if I do?” I bite my lower lip for a flash of a second. I’m teasing, flirting, and I shouldn’t be.
He doesn’t say anything, which makes this moment as awkward and nerve-wracking as possible. I swear I hear my heart beating in my ears—that, or it’s the whoosh and crash of the ocean outside. I’m too distracted right now to differentiate.

My mom’s crazy friend always talked about auras. I never saw them, never believed in them, but she claimed mine was dark red, which meant I was self-sufficient and able to persevere anything.

She also told me that at my mother’s funeral, so she might have simply been trying to comfort me.

If Thayer had an aura, I bet it would be light blue. The color of the sky. Serene and calm.

“You want to name the house?” he asks.

“This cottage.” He glances up at the ceiling. “Give it a name. It can be your house. What’s your last name?”

“Hilliard.” My mother gave me her last name on account of my father abandoning us early into her pregnancy. I never knew his name. Never saw a picture. Only heard a few details, like he was smart and charismatic and successful, but also self-centered and narcissistic. “So obviously there can’t be two Hilliard Cottages.”

“All right. Then we’ll just call it The Lila Cottage.”

I snicker. “That doesn’t quite have the same ring to it as The Ainsworth or The Caldecott.”

“Would your grandfather be okay with you naming this place without his permission? I’m getting major control-freak vibes from him.”

I need to shut my mouth before I get myself in trouble.

Sure, Thayer’s easy to talk to and he seems like a reasonable person, but I literally just insulted his grandfather—my boss.

My cheeks flush with a burning warmth and I glance down for a moment.

“He is absolutely a control freak, and we don’t have to tell him. It can just be our thing.”

So now we have a thing.

“I used to hide out in here when I was a kid,” he says, looking around. “Westley was always so clingy. Like a shadow. And Whitley was always whining about this or that. And sometimes I just needed space.”

“This is quite the hideaway for a kid. A whole house.”

“We should probably come up with a custody agreement of some kind.” I’m flirting. Again. But I can’t help myself. He’s so damn cute. “Maybe I get weekends? You can have holidays because I’ll likely be working those, so ...”

He laughs at me and our gazes lock until our respective smiles fade. There’s a glimmer of something in his eyes … fascination maybe? Curiosity? I don’t know him well enough to tell, but he looks at me in a way that no one else ever has before.

Perhaps I’m a novelty to him.

“I should probably get back to The Bertram,” I say. “I’m sure Grandma’s wondering where I am.”

“We’re going to watch a movie tonight,” he says. “At Westley and Whitley’s.”

“You should come by,” he says.

Yesterday it was the bonfire.

I head to the door, the wood floorboards creaking beneath my quick, soft steps, but before I leave, I turn back to him. “You should probably stop inviting me to hang out.” 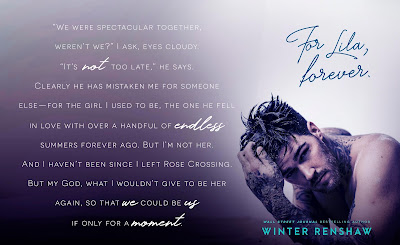 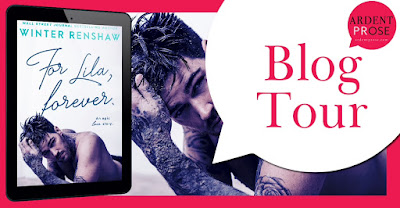