Review: The Nature of the Game by Amy Aislin (Stick Side #2) 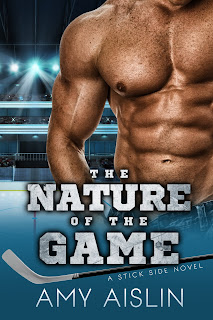 I admit it: I'm a sucker for a well-written second-chance romance and that's exactly what we get with Amy Aislin's second novel in her Stick Side series. Set in 2009, with flashbacks to 2003, The Nature of the Game features twenty-seven-year-old NHL hockey player Ashton Yager and twenty-six-year-old Daniel Greyson, the former being the best friend of Alex Dean and the latter the older brother of Mitch Greyson, both of whom get their story told in the series starter, On the Ice. You don't necessarily need to read book one in order to enjoy or understand the events that play out in book two, but if you're familiar with my reviews, then it shouldn't surprise you that I'm going to recommend you read the series in order so as to have all the necessary histories and a well-rounded read.

Six years ago, Dan Greyson and Ash Yager realized they were bisexual when they fell in love over the summer and then made plans for a life together. But all it took were four words sent via text message for what they had to fall apart and for them to end up with broken hearts. With Dan's brother and Ash's best friend falling for each other, the two erstwhile lovers now find themselves in the same place at the same time. But as much as Dan wants to explain why he was forced to do what he did six years ago, Ash isn't ready to hear any of it. As hopeful as Dan may be for a second chance, he'll happily take simply being Ash's friend, and while Ash is wary and remains distrustful of Dan, there's no denying how he still feels for his ex. Will these two finally move forward or keep holding back?

There was a whole lot of back and forth when it came to Dan and Ash and it was clear from the get-go that what these two needed was a crash course in communication. I confess that there were moments that I felt really frustrated with both Dan and Ash--Dan for constantly going back to Ash even after the guy would reject him in one way or another and Ash for not taking the time to listen to Dan yet being all curious in his head as to what it is that really happened six years ago. Frustration aside, however, I loved the connection these two shared, and absolute kudos to Amy Aislin for that first-time scene which was awkward yet lighthearted and realistically honest. I am loving the heck out of the Stick Side series and can't wait to read even more. 4.5 stars for The Nature of the Game. ♥

Purchase The Nature of the Game on Amazon | Apple Books | B&N | Kobo.