Review: Until I Met You by S.L. Scott 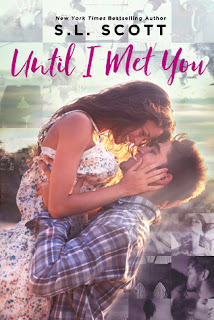 Taylor closed his book and looked up at the sky. Clouds floated by and he realized that these times together, just the two of them, two against the world, the quiet times and the times they talked for hours, was what he had been missing his whole life.

It was then he understood that it wasn't her chaos that had drawn him to her. It was her soul.

The depth of her heart.

The width of her imagination.

The breadth of her knowledge.

The gravity of her pain.

When they first met, she nicknamed him Hazel and asked him to call her Jude. All it took was that one meeting for their worlds to change in ways neither of them ever thought possible. There's nothing easy or simple about the lives they lead as Taylor Barrett and Judith Boehler, but when they're together, nothing else exists except for how they feel for each other. But they can only avoid the real world for so long and when those harsh realities come after them, Taylor and Jude can choose to let go and get swallowed up by everything that's expected of them, or these two can decide to seize control and create their future as one.

I went into this book expecting one thing and came out of it feeling shell-shocked. Yes, shell-shocked, because main characters Taylor Barrett and Judith Boehler, otherwise and affectionately known as Hazel and Jude, fought one heck of a war getting to a happily-ever-after that, at times, felt almost like an impossibility. Author S.L. Scott's Until I Met You doesn't merely tug at your heartstrings; nope, it pulls and yanks each time it feels as if Taylor and Jude are getting a respite from all the hurdle-jumping only to stumble when yet another new obstacle is thrown their way and your heart breaks right along with theirs.

There were times that I felt as confused as Taylor as to what was really going on with Jude. It's too easy to label her as "crazy", especially in the very early part of the book. Once you learn her story, you realize that she isn't crazy at all. She's extraordinarily perceptive and can see far beyond what people barely glance at. I get the initial appeal that led Taylor to taking notice of her, but it's who she is as they spend time together that has him falling for her. She's a complex character and calling their relationship "complicated" wouldn't suffice, but just like this book, Taylor discovers that Jude and their love is worth every hardship.

It's difficult to fully explain why I'm so in love with this book without giving away the story. It's unique and there are moments where you feel as if everything is just too much for any one person or one couple to cope with. But even in those most heartrending times, you refuse to let either Taylor or Jude give up because sometimes, the faith they have in their love and in each other carries over when one feels like throwing in the towel. All it takes is that sliver of light to prevent you from being totally enveloped and overwhelmed in darkness and despair and it is that very light is what Taylor and Jude are to one another.

There are a couple of reviews and comments that mention cheating and both Taylor and Jude are crucified for certain actions and reactions. What people need to understand from the get-go is that neither of these main characters is perfect. They've both got their issues and their are moments that they do wonder if everything they're going through is worth it. Nowhere in the synopsis are Taylor Barrett and Jude Boehler described as infallible or faultless and expecting them to be so is not fair to both the author and you as the reader. For the record, Taylor and Jude were NOT in a relationship when the so-called cheating occurred.

Do I think you should read this book? Yes, I do. I'm highly recommending you add it to your to-be-read list, and I hope you'll end up loving it as much as I did. But every reading experience is different and we all take away our own thing afterwards. What could be an absolutely fantastic book to me may not be your cup of tea, and I respect that. However, I pray that whatever opinion you have is based on you taking the time to read the book, leading you to share your own experience with the rest of the reading public. I'm writing this review because I did read Until I Met You by S.L. Scott and believe it deserves five-plus stars. ♥

Purchase Until I Met You on Amazon.