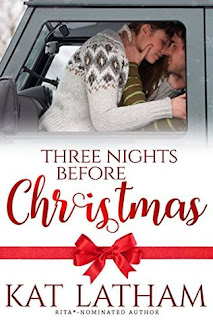 After three years in prison, Lacey Gallagher is only a shadow of the woman she once was. She knows she'll probably never be able to go back to being a freight train engineer or live the carefree life she used to have. Now out on parole, she's focused on helping her older brother out with their family-owned Christmas tree farm while actively avoiding Austin Wilder, the forest ranger that arrested and testified against her. It was clear that he never believed her proclamations of innocence, but the fact that he's starred in her fantasies while she was incarcerated make it imperative that she keep her distance. But when Austin asks for her help in rebuilding a steam train and Lacey agrees to do so, they both find themselves trying to make sense of their growing feelings for the one person they shouldn't even consider falling for.

I've read almost every book written by Kat Latham, and while I've enjoyed every single one of them, I must confess that her latest release, Three Nights Before Christmas, has become my favorite. Beautiful written, Lacey Gallagher and Austin Wilder's story about finding love and redemption was haunting but hopeful. It highlights the things that the Christmas season inspires and reiterates in us--the importance of family, the need for forgiveness, and the undying belief that anything is possible. I loved, loved, LOVED how real Lacey and Austin were, especially when it came to their first few interactions with one another, because it allowed these main characters to truly develop their relationship. They had to earn each other's trust and respect. They have the kind of faith that's been cultivated because of extended periods of time together.

Lacey isn't some simpering, docile woman waiting to be rescued. Three years may seem like a short period of time to be in prison, but we've all heard stories of how even a few months can change someone. Her reaction to Austin is perfectly understandable, as is Austin's to her. That's why I pointed out how important it was for readers to see their relationship grow, because these finding love and forgiveness in a day or two would have been far from realistic. It isn't just her romance with Austin that gets your attention, but that of her relationship with her older brother Sawyer, as she tries to reconcile with him after believing how much she disappointed Sawyer with being with her ex and her arrest and prison time. Speaking of Sawyer, his interest in Lacey's lawyer, Jenna Macintosh, is subtle but rather promising as well.

I was hoping to hold off on reading any Christmas-related stories until December, but with the increasing number of books already out there and ready for release, I decided to bite the bullet. After all, there's an inside joke in my country about the Christmas season starting once the -ber months roll on. And you know what? I'm glad I read this book because it was so much more than I expected. It isn't sappy or overdone. It's a simple story about a woman trying to reconcile the woman she once was and the woman she is now and how she discovers love in the one man she never expected to fall in love with and whom she never thought would love her back. This is also part of a duet, the second book, His Christmas Gift, having been written by Sarah Mayberry and set for release next week. Three Nights Before Christmas gets five stars. ♥