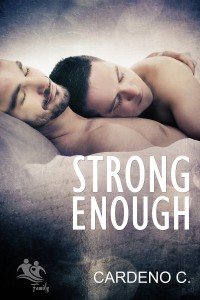 From the moment they caught a glimpse of each other from afar, thirty-eight-year-old college professor Spencer Derdinger and twenty-two-year-old certified electrician Emilio Sanchez have been occupied one another's thoughts, although they had no idea that it was a shared habit. Emilio can immediately tell that Spencer's shy but there's also something else there, something that makes Emilio want to earn Spencer's love and trust, two things that were taken for granted by whomever had hurt him before. It won't be easy and it may take some time, but Emilio feels that Spencer and the possibility of having something far greater than what they originally thought they would get out of their first meeting will be worth the effort.

Strong Enough is the second novel in author Cardeno C.'s Family series and is a book that can be read as a standalone even though Emilio Sanchez is related to Asher Penaz, one of the lead characters from the first book, Something in the Way He Needs. There's quite an age gap between Emilio and Spencer Derdinger--sixteen years--and while Spencer may be more scholarly and probably more intellectually advanced than Emilio, he also lacks the confidence that his younger boyfriend has. Spencer also has certain issues with regards to penetrative sex, and that plus his insecurities all stem from his past experiences with other men. I loved the vulnerability that these two were able to show and how they became each other's support.

Just like with main characters Asher Penaz and Daniel Tover in the first book, things between Spencer and Emilio progress quite quickly, but while I do think these two were smitten with each other, I don't see theirs as a case of insta-love. I liked how the importance of family was shown by way of Emilio and the relationships that he had with his parents and siblings. He may not have had the same privileges that Spencer had growing up, but Emilio did and continues to be buoyed the love and support of his family, something that is missing on Spencer's end. This was a really sweet and highly enjoyable M/M contemporary romance and one that left me with a smile on my face. I'm giving Strong Enough four stars. ♥