Review: Seized By Love by Melissa Foster (The Ryders #1) 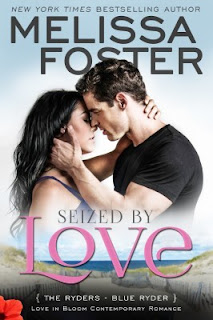 Blue Ryder has been trying to get Lizzie Barber to agree to go out on a date with him since they met a year ago. She's always turned him down, and he's never really understood why. When she does finally say yes, Blue's belief that they're perfect together is reinforced. Lizzie makes him feel things he hasn't felt in a long time and after the betrayal of his first love a decade ago, Blue is ready to be in a committed relationship again. But Lizzie's keeping a well-guarded secret and once she tells Blue the truth, will he prove her fears true by turning his back on her or will he stand by the one woman that he's been falling for for over a year?

Seized By Love is the first book in The Ryders, the newest mini-series in Melissa Foster's bestselling Love in Bloom series. The only other mini-series I've read is Harborside Nights, but the previously released mini-series are all on my to-be-read list, so I'm hoping to get through each of those once my review schedule clears up (because there are A LOT that have already been published). Luckily, this series starter did quite well as a standalone, and while you do become curious about Cash Ryder and Siena Remington's love story, you'll be fine without having any previous knowledge of it. But yeah, add it to your TBR list. ♥

Blue Ryder first came off as this really ideal guy. In short, he was the perfect book boyfriend. But then when Lizzie's secret comes out in the open, his reaction proves that he is human after all, which then makes him more worthy of admiration. Why? I'll always go for the guy who makes mistakes but owns up to them rather than the guy who makes no mistakes at all...because that guy doesn't exist, people. Blue redeems himself and I loved how he never wavered when it came to his being in love with her even as he struggled with dealing with her revelation of being the online baking sensation known as the Naked Baker.

Lizzie Barber was resilient and intelligent, doing what was needed in order to fend for herself while in college, and later on, for her younger sister. She doesn't glamorize what she does as the Naked Baker and I liked that there was a push and pull going on, especially after she met Ryder. She wasn't exactly proud about being what she was doing in her videos but she was proud about coming up with a way to make money that wasn't illegal and wasn't using anyone. Your heart breaks for her when she and Ryder go through the challenges caused by the whole Naked Baker fiasco, but you admire her for her inner strength.

With both Blue and Cash Ryder getting their love stories told, there are four more Ryder siblings waiting in the wings--Duke, Trish, Gage, and Jake--and this first book in The Ryders has certainly made me ready and raring to learn more about this close-knit family composed of five brothers and a sister who live their own lives while still being supportive of each other. If you're nervous about the number of books the Love in Bloom series has, don't worry about having to read all of them before starting Seized By Love because you can go ahead and read this and go through the rest later on. I'm giving book one 4.5 stars out of five. ♥