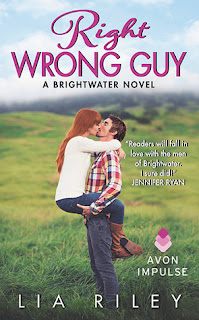 Archer Kane's reputation as a man who enjoys the company of women is known all over his hometown of Brightwater, California, but a chance meeting with a runaway bride in Las Vegas has her looking at a woman for something more than just a roll in the hay. Eden Bankcroft-Kew captivates him, and it is because she's an heiress from Manhattan, New York. She's as beautiful on the inside as she is on the outside but doesn't seem to have a clue just how appealing she is. He calls her Freckles, but it's his nickname of Edie that inspires Eden to start her life anew in Brightwater. She may have a new name and a new business, but the one new thing she doesn't need is a man, especially someone with a reputation like Archer Kane. He's all wrong for her but if that were true, then why does being with him feel oh-so-right?

Right Wrong Guy is the second book in the Brightwater series from author Lia Riley and is about the youngest Kane brother, Archer, and how he meets the woman who makes him want more than what he's usually needed. Archer is seen by family and friends as the one Kane brother who doesn't really take on too much responsibility and would rather spend his time gallivanting and pinning down his current bedmate. And it's not as if the stuff about him isn't warranted, but with a push from his grandmother and inspired by his desire to be the kind of man that deserves someone like Eden Bankcroft-Kew aka Edie Banks, Archer grabs on to the reins of his life and does something more with himself. Theirs felt like an opposites attract story with both Archer and Edie becoming the people they were meant to be together.

I liked that there was much more to Archer than being a playboy and that he owned up to his bedhopping ways. Seeing how his grandmother already knew that he had the potential to be a responsible ranch owner and how that gave him more faith in himself to speak up and not be pigeon-holed as the goof-off youngest Kane made him an even far more attractive male lead character. He may have wanted Edie but he knew that he had to prove himself and that he was no longer going the guy that the town constantly gossiped about. He and Edie just made sense together and that chemistry was there from the beginning even though they had to work through certain issues along the way. The story overlaps the events in Last First Kiss but this was truly Archer and Eden's love story to savor and one that I absolutely enjoyed. 4.5 stars! ♥