Review: Revealed to Him by Jen Frederick (Kerr Chronicles #3) 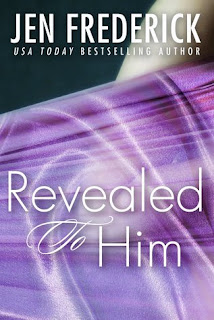 Natalie Beck knows what it's like to be stalked and preyed upon. She's remained trapped in her apartment for the past three years, unable to overcome her fear and anxieties. The rare times she's ventured past her front door, she regresses. But even in her sanctuary, someone is still able to get to her, sending a note that has her scurrying even deeper into the recesses of her mind. When her cousin hires security specialist Jake Tanner to find out who's harassing her and to provide safety measures for her, Natalie finds herself more than curious about the man who's voice lulls her into a feeling of being cared for. And as much as Jake tries to keep everything professional, he can't help but become far more personal with Natalie. Jake has sworn to do anything to protect Natalie, but could being together be the catalyst that will further endanger her?

Revealed to Him is the third book in the Kerr Chronicles series from bestselling author Jen Frederick. While Ian Kerr and Tiny Corielli still appear in this installment, this story solely belongs to Jake Tanner and Natalie Beck. Jake was part of the first two books in the series, Losing Control and Taking Control, and he and Tadashubu Kaga, both of whom happen to be Ian's closest friends, were supporting characters who didn't necessarily steal the spotlight from Ian, but had the kind of presence that demanded that they have their own stories somewhere down the line. Now, we've got Jake's and I'm sure we'll get Kaga's soon enough. Thankfully, this third novel doesn't just live up to the high expectations that were set by its predecessors, but surpassed them. This had a strong and provocative story and two intriguing characters.

While Natalie has a crippling aversion to interacting with the outside world, she seems to quickly connect with Jake. They start their conversations off with text messages and then move on to phone calls, and it's clear that she's been needing to form a link to someone outside of the very small, usual set of people she interacts with. Jake only meets her after she hides away from the rest of the world and yet he accepts her for who she is and doesn't demand that she be who she once was. Her cousin, her best friend slash editor, and her therapist limit her in their own ways, locking who she is with her diagnosis of severe anxiety, so Jake is different--someone who sees beyond her supposed deficiencies. Their romance is uncommon, but it does prove that sometimes all it takes is that connection that tether you while giving you courage to fly.

I already had my suspicions with regards to who could be behind what was happening to Natalie. I can't really go into detail as to what happens, but I will say that I was right but was in for a surprise. There's a twist that happens and it threw me for a loop. This was a story that played out really well, never leaving room for boredom to set in. Both the romance and the mystery suspense parts of the book melded together in a way that it wouldn't have worked as well if you had one without the other. I'm guessing that Sabrina Tanner, Jake's youngest sister, will get her own chance at happily-ever-after with Kaga, and hopefully, we'll also get Steve (still no last name) included in the series, as well as Natalie's cousin, Oliver Graham. Whatever may be up next, fingers crossed that it'll be as good as five-starred Revealed to Him. ♥

Pre-order Revealed to Him on Amazon.