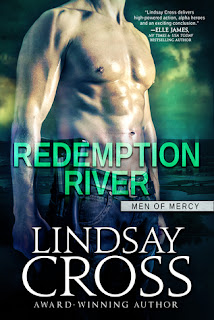 Hunter James and his team have faced danger more times than they choose to remember and the possibility of never returning is a constant. When one particular mission makes that possibility a terrible reality for a teammate, Hunter wishes there was a way to redeem himself for not saving his closest friend. The latest mission for the task force places him back in his hometown of Mercy and in the presence of the only woman he's ever loved and the very same one who broke his heart--Evangeline Videl. As much as he hopes he could avoid being around her, Hunter has no choice but to stay close to Evie...because he needs to find out what exactly her role and that of the revolutionary group that she heads in crimes against the State. Will it be too late before they realize that they're up against a common enemy, one who never loses.

Redemption River is the first novel in the Men of Mercy series from author Lindsay and is set in Mercy, Mississippi. This is a second chance love story between Hunter James and Evie Videl with large doses of action and suspense. This is the kind of book that makes it clear early on who the good guys and who the bad guys are, but that doesn't take away from the anticipation you feel when Hunter and the rest of his team try to figure out exactly what's going on in Mercy. Of course, Hunter and Evie wading through years of heartache and abandonment is where a great deal of the emotion in this books comes from. Evie endured years of abuse with the man she thought she was in love with and just because she's tried to move on from their relationship doesn't exactly mean that her ex has done the same or that he'll ever let her go.

I enjoyed the book as a whole, with an intriguing story fraught with tension and main characters that you empathize with. There are a lot of supporting characters and with this being a series starter, I understand the intent to introduce recurring characters so that readers can familiarize themselves with each one. Of course, I do wonder if this means that all the members of the task force will be getting their stories told, which I certainly wouldn't mind. The writing was good and the story was well-paced and that ending...ooh, that ending! It's one that promises readers that there's a heck of a lot more of everything that we got with this first book waiting for us in the second book, and I'm sure, in all the books in the series. Redemption River sets the bar high for the rest of the Men of Mercy. I'm looking forward to reading more. Four stars! ♥

There are currently no purchase links for Redemption River. I'll post them once they're available. ♥