Review: Playing With Fire by Alison Bliss (Tangled in Texas #2) 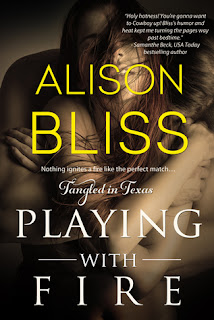 "There are things you don't know about me. Things that matter. You have no idea what you're getting yourself into. I'm not a whole person." More tears flowed down my cheeks as  I tried to make him understand. "I'm...broken."

His gaze flickered over my face as his mouth set in determination. He ran his fingers along the nape of my neck and leaned into me. "Then let me fix you," he whispered.

They say when you play with fire, you get burned, but even with their past experiences regarding fires, nothing prepares prim and proper librarian Anna Weber and playboy firefighter Cowboy for what happens when their passion for each other ignites. Of course, Anna isn't delusional. It may have been a decade since she last saw Cowboy, but his reputation when it comes to women is alive and kicking. He simply sees her as a challenge and she refuses to be just another notch in his bedpost. But there's something about the quiet and demure woman that's enchanted Cowboy, and while he may want Anna in bed, he also finds himself dealing with feelings and emotions he's never encountered before. When these two finally do come together, will theirs be a love that burns bright or a lust that's destined to fizzle out?

When you've got a supporting character who only goes by the name of Cowboy (because the man simply refuses to divulge his real name and when you've got a reputation like his, one name should suffice) and ends up leaving one heck of an impression in the series starter, it only seems fitting that he's called up next to the plate and gets a story all his own. Well, technically, not all his own since Playing With Fire is a story he shares with Anna Weber, a girl he met ten years ago but can't seem to recall (ouch!) when they meet again after she moves to his hometown of Liberty, Texas. If Rules of Protection made me an instant Alison Bliss fan, this second in a series has confirmed my fangirl status. Could this woman's storytelling skills get any better? Why, yes, dear bookaholics, they can indeed. She certainly doesn't disappoint with this sequel.

You expect the humor, whether deadpan or otherwise, but this book surprised me with the fair amount of drama that's been added, courtesy of Anna's past. She's got an aversion to fire and throughout the book, you wonder why. Clues pop up and with physical reminders of that past, it's clear that it was traumatizing. The fact that Cowboy is a firefighter who has had more than his fair share of experiences with fires, makes their coming together almost feel as if it's meant to be. Being with someone like Anna and providing her with the care and comfort that she needs adds a new dimension to the man who's mostly known for his innate ability to attract women like nearly every carnivore to a plateful of bacon. He's sensitive and sweet, but we're never allowed to forget that he's a sexy man who knows just how most of womankind sees him.

Just like with the first book, I had my sights set on one particular suspect early on. Here's the thing though: distractions are thrown in to tempt you to second guess yourself. You're so into the story, eager to see how Cowboy will convince Anna to go on one date with him as well as anxious to find out who's stalking poor Anna, that even though you already know who the culprit is, you keep going because witnessing how everything plays out counts more than being right. I may have finished both books in the Tangled in Texas series in one day, but I'm already eagerly awaiting book three, which I'm assuming will be Bobbie Jo's since Ox and Judd are already in long-distance relationships. And yes, I know it'll be worth the wait. Playing With Fire sits right alongside Rules of Protection on my all-time top reads list and receives five-plus stars. ♥