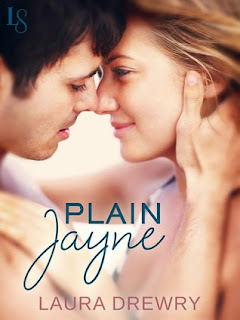 Best friends since they were in kindergarten, Jayne Morgan and Nick Scott were as close as two people could get. Even with college and Nick's marriage, their friendship stood up to whatever challenges came along...until Nick's wife was killed in an accident and Jayne's presence at the funeral had Nick pushing her away, straining their relationship for four years. When Jayne's estranged grandmother leaves an old bookstore to her, Jayne decides it's time to return to their hometown and Nick is there to welcome her back. People insist that a man and a woman being best friends isn't realistic and that there's probably something more going on. With a quarter of a century worth of friendship on the line, neither Nick nor Jayne think they'll ever be more than friends...but what happens when that's exactly what they both want?

Plain Jayne is the first novel in the Friends First contemporary romance series from author Laura Drewry and is about two best friends, Jayne Morgan and Nick Scott, who have survived time and distance as well as the doubts from family and friends that they really are "just" friends as well as the insecurities of Nick's late wife. This was a good story of best friends falling for one another, especially since what they is a very strong friendship that's lasted twenty-five years. For a good portion of the story, I actually thought that neither of them had any sort of crush or unrequited thing going on, so that would have made this something really unique. Of course, I later realized that Jayne did have a crush of sorts but accepted that she would never be the type of girl Nick would fall for because the ones he dated were the opposite of her.

This was a good series starter because it introduced readers to the core players of the series while maintaining its focus on Nick and Jayne's love story. There's a lot of humor that goes on and it balances things out well when things become heavy for the couple. One of the more memorable light moments involved the double date with Nick and his girlfriend and Jayne and the blind date Nick set her up with who turned out to be gay. Almost everyone in the book was highly likable except, perhaps, for Nick's mother. The woman was judgmental and the fact that she still looked at Jayne with disdain even after she learned about Jayne's story made me dislike her even more. Overall, I enjoyed this friends-to-lovers romance and it made me look forward to the rest of the Friends First series. Plain Jayne garners 4.5 stars. ♥