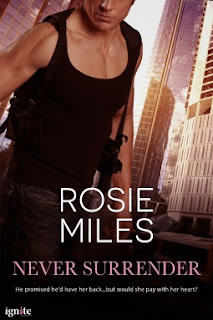 Maggie Sinclair's been undercover for a year, three months over the allotted time given, and it's been as long as the end of her relationship with Quinn Keller. She told him then that she would never ask for his help, but with her superior missing and two witnesses that she needs to bring in, Maggie knows her best option is to get in touch with the person she trusts most--Quinn. She knows he has no reason to help her, especially after she chose going undercover to being with him, but when it becomes clear that she's being framed, both Quinn and Maggie join forces and work together to ferret out the truth. Their teamwork is as efficient as ever, but the love and chemistry never really went away, and now they'll have to overcome their personal issues and professional obstacles if they hope to make it out of this case together and alive.

Never Surrender is the debut novel from author Rosie Miles and is a romantic suspense standalone about two former partners and lovers who, after a year of separation, work together to bring down a man involved in sex slavery. This was a really great and strong story that kept everything fast-paced while amping up the tension as the plot to paint Maggie Sinclair as an undercover police officer as a turncoat becomes more complex. She's a strong heroine and it's clear that she was far more cocky and overly sure of herself a year ago, right before she started her undercover assignment, and her reaching out to her ex and fellow police officer Quinn Keller shows that she's learned quite a few things since then. There's a vulnerability to her that makes her more appealing than had she been hardcore about her independence.

I already had my suspicions regarding two individuals in the story and I was proven right later on as to who they were and what their motives were, though the extent of their involvement in Maggie's case floored me. Both Maggie and Quinn were excellent as main characters, and I liked that there was still this tension between them, both the good sexual kind and the not-so-good we-have-differences kind, as they were trying to figure out if being a couple again was worth the risk of getting their hearts broken. This story also had a pretty strong cast of supporting characters, namely James Ferguson and Cooper (whose last name wasn't mentioned) and they would have had potential for spin-off stories, but they're both happily married and have kids, so I'm guessing there won't be any future stories for these two good guys.

The copy that I received for review is an advanced reader's copy (ARC), so finding errors isn't a biggie, but I do wish that, with the story being set in Australia, the ranks of the characters involved with the police would have been consistent as to those used in the country. I did a bit of Googling and saw that there was no mention of the rank of Detective in Australia, which is what Quinn and Maggie both were. Now, it would have been fine if the decision was to stick to that, but it was being interchanged with the rank of Constable and Senior Constable, and then you had superiors who were Inspectors, a rank that's used in Australian police departments, so the possibility of confusion is ever-present. But focused on just the story and the characters, Never Surrender was a highly entertaining read and one I'm giving 4.5 stars to. ♥