Review: A Moment of Weakness by Brooklyn Skye (Boston Alibi #1) 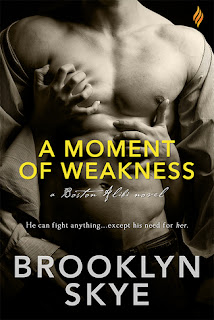 Laurel Harris may have a job as an elementary school teacher when the school year starts, but she desperately needs one over the summer to tide her over. Becoming the nanny to her best friend's six-year-old niece may be her saving grace, but her best friend's brother doesn't seem too thrilled about a stranger coming into their lives and doesn't feel the need for a nanny. However, Micah Crane wants what's best for his little Lucy, even if that means moving Laurel into their home and listening to her judge his parenting skills. He's doing the best he can to provide his daughter with the kind of life he and his sister never had, even though being an enforcer for a mob associate while balancing work at the bar he co-owns isn't ideal. Micah knows giving into his weakness could spell trouble, but resisting Laurel is no longer a viable option.

A Moment of Weakness is the first book in author Brooklyn Skye's Boston Alibi series and is about a would-be elementary school teacher who becomes the nanny to a mob enforcer's young daughter. This is the kind of story line that can prove to be tempting for many readers and I'll admit that the blurb had me expecting a dark undertone because of the whole mob aspect to the story. Unfortunately, the story was lacking and left me wondering if all that really mattered was that they got to their happy ending even though the journey getting there felt somewhat...blah. The tension between Micah Crane and Laurel Harris was mostly there because Micah was closed off and distrustful and Laurel kept prodding and pushing. It wasn't sexual tension because Micah was tense most of the time and it wasn't really sex-related.

There are many things I wish for when it comes to this book but I guess I could sum them up in one word: development. I so wanted there to be more character development because Micah and Laurel were two people who already had the makings of characters you could empathize with. Then there's story development and I really hoped that they could have delved more into Micah's mob connection and how that affected Laurel and Lucy. The series is entitled Boston Alibi and the bar that Micah co-owns with his best friend is called The Alibi, yet it doesn't really play that big of a role in the overall story. I just feel that there were missed opportunities for a book that had so much potential and a good foundation. And I'm sorry, but that ending? Hello, they're in an elementary school! >.< A Moment of Weakness gets 2.5 stars. ♥

Pre-order A Moment of Weakness on Amazon | B&N | Kobo.