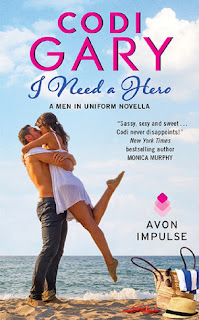 Sergeant Oliver Martinez has always tried to do the right thing, but when trying to be a hero lands him in hot water with his base commander, Oliver needs to suck it up. He's been tasked to work on a public relations campaign for the Alpha Dogs Training Program with PR specialist Evelyn Reynolds. There's an immediate attraction between the two of them, but as much as Oliver wants to pursue something with Eve, she makes it abundantly clear that she isn't interested in men in uniform. The fact that she's the daughter of his base commander complicates things even further. But the more Eve denies her growing feelings for Oliver, who is the epitome of everything she swore she would never become involved with, the more she's tempted to take a chance on the man behind the uniform. Will this be forever or one heartbreaking fling?

I Need a Hero is the prequel novella to author Codi Gary's latest series entitled Men in Uniform, plus this also happens to be my very first Codi Gary read. With a hot guy in (and out) of uniform who has a genuine love for his country and his family, an independent woman who wants someone who puts her first, and a couch-chewing dog in need of a home, this book may have captured my attention in the beginning but it captured my heart by the time I was done reading it. Novellas are often much shorter than full-length novels, and sadly, there's a tendency for the story to feel rushed or lacking in terms of details and the like. Same goes for character development, since it's difficult to pack lot in a limited number of pages. But, I'm happy to say that this particular novella gave a complete story with characters you get to know pretty well.

Oliver and Eve were main characters that were easy to like, both with a strong sense of family and are close to friends they've known for some time and trust completely. Eve may have come off as a bit reticent but when it came to Beast, the supposedly ugliest dog in the Alpha Dogs Training Program, the woman overturned whatever pending negative opinion I may have had forming because of her resistance to Oliver. Now, Oliver was simply a good guy and it's an absolute bonus that he happens to share the same name as my baby boy (aka my dog). Aside from his love story with Eve, I couldn't help but sigh happily as his own love story with Beast evolved. This novella also introduces readers to other characters that I'm sure we'll be seeing in future books. I hope those will be just as good as I Need a Hero, which gets 4.5 stars. ♥