Review: His Fantasy Girl by Nina Croft (Things to Do Before You Die #1) 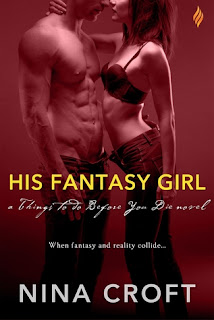 One unforgettable night fed a year's worth of fantasies while Logan McCabe was in prison. Eleven years after that night to remember, a near-death experience has Logan wanting to see if the girl in his fantasies is just as good--or better...or worse--in reality. And Abigail Parker is different from the eighteen-year-old girl she once was. She's all woman now and beneath her prim and proper appearance is someone who craves the same things he does, even if she's hesitant to admit it to anyone, even herself. She may be in the one profession he and his family distrust most and she may have kept his daughter Jennifer a secret for more than a decade, but being with Abby and spending time with Jenny are surpassing any fantasies he may have had. What happens when Logan learns that being with a man like him isn't part of Abby's plans?

His Fantasy Girl is the first book in the Things to Do Before You Die contemporary romance series from author Nina Croft. It's also a spin-off of the third book in the author's Babysitting a Billionaire series which was about Jessica Bauer and Declan McCabe, younger brother to Logan McCabe. This new series has three men who share a near-death experience and decide to do something about the one thing in their lives they wish they had changed the outcome of before. Logan McCabe and Abby Parker's love story isn't one that started eleven years ago because that was purely about physical desires and satisfying them several times over with someone you've never forgotten and that resulted in a daughter named Jenny. So, this wasn't a second chance romance but more of discovering that Logan's reality surpasses his fantasies.

Logan and Abby may seem like a case of opposites attracting, but I think that Abby kept her real self hidden for years, trying to meet everyone else's expectations of her, and that she had a rebellious side itching to get out. Being with Logan was both a good thing and a bad thing for her since it allowed her to release that side of her that could give in to her needs and wants but he also didn't fit in to the "perfect" life she was constantly trying to create for herself and for her daughter. Their story is told well and I liked how everything played out between the two of them. I appreciated that not everything was not neatly tied up--i.e. her career advancement--but I did feel that the ending was a bit rushed and too Hollywoodish. Overall, His Fantasy Girl was a good read and I'm curious to see what's up next in the series. Four stars. ♥