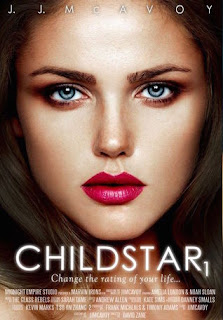 Note: This ARC was provided by INScribe Digital via NetGalley in exchange for an honest review.

Amelia London and Noah Sloan began their time in the limelight as child actors who went on to achieve success as teen stars. However, after two decades in the business, their agents never fail to remind them that it's past time for them to re-start their faltering careers. Their one chance lies in a bestselling novel that's about to made for the big screen, but they're not sure if it'll be worth having to be in each other's company for an extended period of time. After all, these former co-stars were also former lovers and  the entertainment world is a small one. With no other alternative but to tolerate one another's presence while filming Sinners Like Us. However, these two never professed to be saints and with fate catching up to them, long-held secrets are about to come out into the open and feelings long-thought buried come to life.

It may be short and it may end in an evil cliffhanger that was going to prove that patience was a virtue I still don't have, but the very first installment of Childstar, which also happens to be my first J.J. McAvoy read, is the kind of stuff that book dreams are made of. It isn't just that Amelia London and Noah Sloan have their own intriguing life stories as well as share a love story that gossip shows and tabloids go nuts over. There's more going on here than meets the eye and we get a teeny tiny glimpse of the bigger picture in that evil cliffhanger I mentioned. Yes, it's evil because it leaves you hanging but I'll give it a pass because of two important things: 1. The wait isn't really that long, with all three installments set for release a week apart from each other, and 2. You won't be able to not want to know what happens with these erstwhile lovers.

J.J. McAvoy's has created two lead characters who exemplify the idea that people in Hollywood aren't as flawless as they're presented to be. These two have issues--with their families, the business they're in, and yes, with each other--but as flawed as they are, there's a vulnerability that they share that makes you want to dig deeper and discover the "real" Amelia and Noah. The second chance romance that these two are struggling to grab with both hands while also pushing away piques at my curiosity because while we think we know why they broke up all those years ago, there was way more going on behind the scenes. Let's face it, it's the behind-the-scenes stuff that tends to be juicier and more salacious. So, yes, there's a cliffhanger, but you'll want to hang on because Childstar is already looking to be one heck of riveting ride. Five stars! ♥