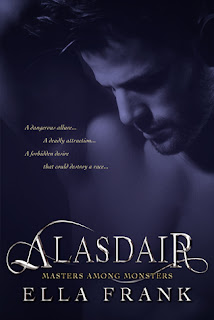 Alasdair's lips hovered over his ear, and as his warm breath washed over his skin, he whispered, "I believe you may be the one..."

Leo pressed his palm flat against the chest he'd been clutching, pushing Alasdair back so he could look at him. "The one?"

Alasdair's eyes blazed with heated jade, and then he lifted him off his toes. "Yes. The one that has been sent here to kill me."

Alasdair Kyriakoús is a very powerful vampire, having been sired by the Ancient named Vasilios and to whom he has tied himself to from the time he was turned. He prides himself on his self-control and ability to not allow anything or anyone distract him from what is expected of him by the council of vampires and those of his kind who deem him untouchable because of his earned status in their world. He has lived for over two thousand years and has never lost sight of his obligations and gives in to his desires whenever he chooses, but it is only when sets his sights upon a human named Leonidas Chapel that Alasdair self-control wavers. The existence of vampires was something Leo believed was something relegated to myths and legends, but Leo is unlike any other human that Alasdair has ever come across and both have questions that demand answers. While their natural curiosity of each other is something that may be satisfied, it is their undeniable attraction that'll prove to be the one unavoidable danger to both and those around them.

Vampires are familiar creatures to anyone who's cracked open Bram Stoker's classic Dracula, Stephen King's 'Salem's Lot, or even the Twilight series by Stephenie Meyer. But in each of these books that I've mentioned, the vampires these talented authors were able to weave original tales and created their own special breed of these enigmatic beings. So, when a reader like me comes across a book that is about vampires, I keep an eye out on what will make this newest batch of fanged entities different and, more importantly, memorable. A special breed of vampires requires a special breed of writer and that is exactly what Ella Frank is, because her vampires may be similar to those before them in that they are bloodsuckers, but Alasdair Kyriakoús and the rest of his kind in Alasdair, the very first book in the Masters Among Monsters paranormal romance series, demand that you pay attention because they do have a unique story to tell and it is one that should not be missed, lest you end up regretting this misstep.

This is my very first Ella Frank book. Yes. I admit it. I have several of her books waiting for me on both my Kindle and Kobo apps on my tablet, so I don't really have much of an excuse other than a lack of time. And yes, I am terribly embarrassed that it's taken me this long to read something written by her, but if I wanted evidence of why many a reader have fallen in love with her words, her characters, and her stories, then I need look no further than Alasdair because what an introduction it is to her gift for storytelling and character development. I started and finished this book in one sitting, and it's been nearly twenty-four hours since I got to the end and I'm still experiencing a hangover of epic proportions. I couldn't turn my concentration away from Alasdair, Leo, and the rest of the cast of characters because the story they were part of was one that had an eroticism that was never vulgar while remaining shrouded by an air of mystery because of who Alasdair and Leo were and how they seem be destined to have an unbreakable connection.

Let me put this out there: the book ends in a cliffhanger and when I got to that particular point, I couldn't help the loud shout of "No!" that came out of my mouth. So, yes, I am left with questions that are demanding answers and I've almost got this feeling that I won't be getting all of those when I finally get my hands on the second book in the series, Isadora, due for release in January 2016. Alasdair and Leo have officially become my newest favorite book couple, though I suspect that they've still got a very challenging journey ahead of them. I have my own theories about what's going on with the vampires and Leo and his friends, but I think I'll keep those to myself for the meantime because I may require another read-through (or two or three...or more) to decide which theory I'm sticking with going into book two. I will say this though: I don't trust Vasilios and if I could drive a stake through his heart, I would (if that is, indeed, a way for these vampires to be destroyed). I'm declaring Alasdair a must-read, all-time favorite. Five-plus stars! ♥