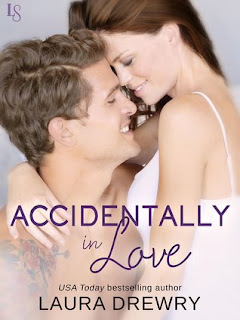 It could be all those speeding tickets that he's given her or the fact that she's got a bunch of condescending nicknames for him, but Brett Hale is more than aware that Ellie Palmer doesn't particularly like him all that much. When he catches her driving like a bat out of hell yet again and then discovers that her license has been suspended, he informs her that she needs to attend a safety driving course in order to get said license back. Ellie isn't looking forward to spending time with Brett, but when an ex-boyfriend out for revenge makes his presence known, it's Brett who's there to protect her. Pretending to be a couple is part of the plan to bring Ellie's ex down, but pretending that what they're beginning to feel isn't real is even more difficult for them both. Lying to their family and friends is hard but facing the truth isn't easy either.

Accidentally in Love is the third novel in Laura Drewry's Friends First contemporary romance series and it turns the spotlight on police constable Brett Hale and dress shop owner Ellie Palmer, two individuals who don't get along but are forced together because of their shared circle of friends. There's a curiosity that these two have when it comes to one another, but that's often overshadowed by the one-sided bickering that goes on since Ellie doesn't really appreciate Brett's ticketing skills or that he doesn't bend the rules for her (or anyone else). I was on the fence about these two as a couple, and I think it had a lot to do with my not being fully on-board that there was more than an attraction going between them. Yes, they were probably attracted to each other, but it just felt as if they didn't really make sense until much, much later.

There's a bit of a suspense thriller feel added to the story, what with Ellie's ex-boyfriend drug dealer returning to disrupt her life. Of course, Brett's being part of law enforcement ties everything together quite nicely, though I think the whole fake relationship thing was a tad forced and really felt more like it was a convenient excuse for them to be closer and develop feelings that I think would have evolved naturally even without them being thrown together. I did like the banter that these two engaged in, especially because it was good-natured compared to when Ellie was pissed at Brett because he was a police officer. By the end of the book, these two did win me over and the story was pretty good all around. With three friends down, there's only one more to go in the series. I'm giving Accidentally in Love four stars. ♥