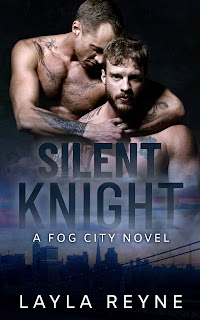 Note: An advanced reader copy (ARC) was provided by the author via Valentine PR.
Now, that's how you end a series as good as Fog City! Layla Reyne has had me hooked on all things Madigan ever since she self-published the original trilogy centered on the eldest of the siblings, Hawes, and the man who slayed his heart (in a good way), Christopher Perri. The trilogy became a five-book series, with book four featuring Hawes' and Chris' sisters, Helena and Celia, respectively. The fifth and final book features a story that's a long time coming--that of Holt Madigan and Braxton Kane. Fourteen years in the making. Holt and Brax's happily-ever-after may be guaranteed, but it'll be a very hard-earned one.
When Braxton Kane first saw Holt Madigan, he was a thirty-six-year-old captain in the army while Holt was a twenty-six-year-old private. The draw to the younger man was strong, but Brax knew nothing could happen between them. Instead, the two became the closest of friends, a friendship that continued even after Holt left the army and joined the family business--even after that one unforgettable night that two men shared. Life went on for both, with Holt settling down with a wife and child, clueless to how much his best friend loved him. But so much has changed, and Holt feels Brax distancing himself. When Brax's job as chief of police is threatened, will Holt be able to save the man he loves most?
My cheeks were hurting from all the smiling I was doing after I was done reading this book. Both Holt and Brax had been through a lot in their lives, and it was so clear that they deserved to have love, peace, and happiness, but more so as a family unit. The foundation these two had built was a strong one, but then, they had also kept certain things from each other, particularly how that night they had shared years ago had impacted them as individuals. I loved seeing how they opened themselves to that happily-ever-after they'd earned TOGETHER. Layla Reyne gives Fog City (and the Madigan siblings and the people nearest and dearest to them) a fantastic send-off with the 4.5-starred read that is Silent Knight. I can't wait for what else she has up her sleeve for this book universe.
Release Date: 03 May 2021
Date Read: 01 May 2021
Learn more about Layla Reyne.
Purchase Silent Knight on Amazon.