Review: Working for It by BJ Harvey (Cook Brothers #5) 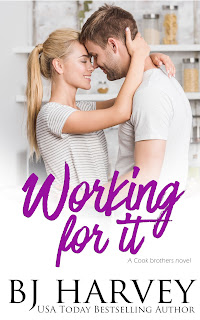 "You love it. And in case you want to know, I'm falling for you too."

Universe, it's me, Gillian Eve Nelson. Send help, because I'm totally screwed. And by screwed, I mean deliriously happy.

But for the love of God, please let Ezra have a flaw or two. I'm starting to get a complex.


Why are so many of my favorite series ending this week?! And by "many", I mean two, but still... BJ Harvey's Cook Brothers series may not have been my introduction to her writing, but it's certainly the one that's made her a go-to author for me. I adored her brand of humor and this group of four brothers and their best friend. This series is actually a spin-off of Game Saver, which features the lone Cook sister and the third novel in Harvey's Game series. Having said that, you don't need to read any other book going into this fifth and final Cook Brothers novel, although I do highly recommend you check out those earlier releases because they were romantic comedy gems!

Working for It is all about Ezra Baker, who may not be a Cook by blood but with such close ties between the Bakers and the Cooks, he may as well be one. The thirty-seven-year-old architect and consultant may be a success professionally, but his personal life has been lackluster at best, mired by two divorces which he's still literally paying for. His younger sister and his four closest friends have all found love, home, and forever, but while Ezra has yet to find those, he isn't complaining, not when he's spent the past eight months enjoying the company of thirty-five-year-old lawyer Gillian Nelson. They're hot together, so hot that they've unexpectedly got a bun baking in the oven. Can these two people who became great friends with better benefits find the best possible ending together?

Okay, I don't want to say that this is the best book in the series or that this is my favorite--because hello, I adore this series as a whole and choosing one favorite is like being forced to choose between bacon and shrimp (I know that doesn't make sense, but yeah...)--but gah! I loved, loved, LOVED Ezra and Gilly! These two were so darn witty and mixed in with how Ezra and Gilly went from two people who were in it for the sex and friendship to an honest-to-goodness couple with true feelings that went beyond what was there in the beginning. And the rest of the crew--the Cooks and the Bakers alike--were a hoot. They teased like crazy, but they were also the greatest support system that Ezra and Gilly could have ever wished for. With the humor came a pinch of angst, thanks in large part to Gilly's family, but that's the sort of rom-com that I love, which is why I LOVE Working for It! It gets five-plus stars. ♥

Purchase Working for It on Amazon | Apple Books | B&N | Kobo.