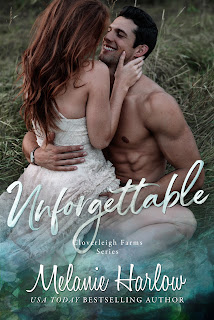 He pressed his lips to mine, and his kiss tasted like forever. "Now there's you."

It was back in February of last year that Melanie Harlow kicked off her Cloverleigh Farms series, beginning with the youngest of the five Sawyer sisters in Irresistible. Each new book welcomed readers even further into the lives of this set of siblings and the families they created for themselves while further strengthening their own bonds among the five and with their parents and their shared legacy with Cloverleigh Farms. I can't quite believe that we've now reached the end of this wonderfully written series, but all good things must come to an end. Maybe if I keep my fingers and toes crossed for a spin-off series featuring the next generation in the Sawyer clan, we'll be able to revisit this quaint bit of home and hearth--and family!--in small-town Michigan. But I digress. The series may have come to a close, but it certainly ended on such a high, all thanks to the touching story in Unforgettable.

When April Sawyer and Tyler Shaw were eighteen, they were close friends and nothing more. She babysat his younger sister and helped him with schoolwork, but she wasn't besotted with his baseball prowess or good looks. Then after their graduation from high school, they cross a line before heading their separate ways. Tyler would go on to fulfill his dreams of becoming a professional baseball player, considered the best among his peers, king of the mound he stood atop...that is, until it all became a nightmare during the World Series. Now, Tyler has retired but still deals with the aftermath of how his career unraveled. He lives a private life, not wanting to deal with the public or their questions and unsolicited advice and armchair expertise. When his sister insists he return home for her wedding, it's been eighteen years since he left, but he's never forgotten the gorgeous girl with the red hair and freckles--April Sawyer. He's not staying; she's not leaving. They may have no future, but will they rehash their past?

Like its predecessors, Unforgettable can be read as a standalone, however, I'm going to recommend you read the books in order if you do decide to read the entire series given that there may be spoilers with as far as recurring characters are concerned. Having said that, Melanie Harlow upped the ante with the previous novel, Unbreakable, and my expectations were right up there. Guess what? Expectations. Surpassed! I loved how April and Tyler's story had an original feel to it, and while I can't say exactly why since I don't want to this review to get all spoilery, what I will say is that theirs was romance that truly only began eighteen years after that one night they shared. Yes, there was attraction between them as teenagers, but that honest-to-goodness love and romance only truly developed between them when they were already thirty-six, both having lived separate lives. It took a bit for me to warm up to Tyler because the guy was seriously bull-headed at times, but he did earn my affection. Five-plus stars for this fifth and final book. Check out this series which started as irresistible and has become rather unforgettable. Wink. ♥