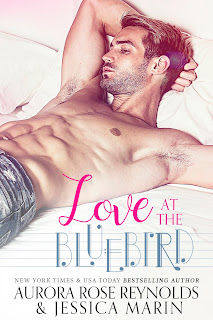 Love at the Bluebird is a contemporary romance co-written by Aurora Rose Reynolds and Jessica Marin and released through Reynolds's Boom Factory Publishing. It's the story of a country star and an assistant in the artists and repertoire department of a rival record label. Gavin McNeer's career in the music industry began as a songwriter for other artists, but now, he's taking the world by storm singing his own songs and touted as one of country music's biggest new stars. With a song at the top of the charts and an upcoming tour for his first album, Gavin has little time for a personal life. Then he catches a glimpse of a beautiful woman sitting in the front row of one of his shows. He's completely taken by Alyson Dawson, and the connection they share has him willing to open himself up to love once again. Aly is just as smitten with Gavin, and it's as if the heavens are shining down on her, what with her career as an assistant to one of the best A&R managers around. But Aly could end up losing everything when she's tasked to do something at work. Will Gavin and Aly stay in harmony or become discordant?

I've enjoyed quite a few of Aurora Rose Reynolds's books in the past, and she was admittedly the main reason why I was looking forward to reading this book since Jessica Marin was a new-to-me author. For the most part, this was an okay read. There was no denying the chemistry between Gavin and Aly, but it never felt like something that was all-consuming. The story did feel rather rushed and the two-part conflict leading to drama that was a bit over the top for me. Gavin and Aly were good enough main characters, and I did like them individually, but again, I didn't become as invested in them or their relationship as I would have wanted to, and that's a necessity for me when it comes to the romances I read. Overall, Love at the Bluebird was pretty good but not my favorite. This gets 3.5 stars. ♥

Purchase Love at the Bluebird on Amazon.