Review: The IT Guy by Andi Burns 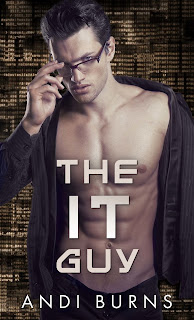 Confession time: I have a thing for age-gap romances where the female main character is older than the male main character. The reverse is usually more common, which is why flipping it around make for a more interesting take on an old trope. Andi Burns's debut release takes on this trope and does a rather good job of it as evidenced in The IT Guy. This romantic comedy read is about thirty-four-year-old Elaine Madigan, head copywriter for Chesapeake Shores, and twenty-five-year-old Simon Walker, one of the computer whizzes over at the IT department. Lainie's got a lot to love about her life--her job, her house, and her cat--but doesn't have much of an actual love life to speak of. That doesn't mean she hasn't noticed Simon over at IT. Yep, he's the IT guy, and he's definitely got IT. But he's nearly a decade younger than Lainie and they're co-workers, so any sort of shenanigans would be a bad idea. She's just going to have to try harder to pretend she doesn't notice how close to perfect Simon is. What she doesn't realize, though, is that Simon already has his sights set on her and intends to crack the code to her heart.

Getting to read an author's debut release always feels like a big deal to me. It's that first glimpse readers get of the writing, and that first impression tends to be mean a lot. Andi Burns is an author who clearly had a story to share with her readers, and she did a rather good job of it. Yes, there's a lot of room for growth, but what's already there was notably promising. I enjoyed Lainie and Simon's story, which had a good amount of humor mixed in with the romance, and neither one overwhelmed the other. These two had some great chemistry, and I liked seeing Lainie let loose and get over her inhibitions regarding the whole age difference thing. She had a lot of insecurities, which appears to be a far more common theme when it comes to the heroine being older than the hero, so it was nice to see her come into herself when it come to her relationship with Simon. My biggest quibble about the book has to do with how rushed the ending seemed to be, which was a wee bit disappointing--the rushed ending, not the ending itself--because it'd been paced well enough prior to that. Still, The IT Guy was an overall four-starred read. ♥

Purchase The IT Guy on Amazon.