Review: Fake It 'Til You Break It by Meagan Brandy 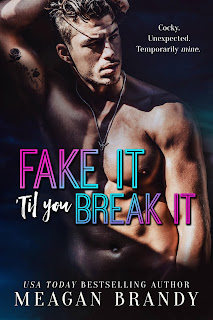 Fake It 'Til You Break It was my introduction to Meagan Brandy's writing and it turned out to be a good one. Admittedly, this was a bit of a risk because the fake relationship trope isn't exactly one of my go-to choices. It takes an extra bit of convincing for me to even consider reading the trope, unless it's penned by one of my favorite authors. Since Brandy was a new-to-me author, I decided to bite the bullet and dive in--and I'm glad I did. Most of the fake relationship romances I've read tend to lean towards adult contemporary, and the few young adult I have read are fairly innocent. With Brandy's new book, it was more mature young adult and had all the angst I needed!

No one would ever think Demi Davenport and Nikoli Sykes would make an ideal couple. They may both be eighteen, seniors in the high school, and neighbors since they were children, but they're not friends and have barely anything in common, tied together by the fact that their respective best friends were a couple. But then they're paired as partners in chemistry, and when Nico suggests they have a fake relationship, Demi is taken aback. He says it'll guarantee Demi gets the attention of the guy she's been crushing on, and Nico says he'll gain something from it as well. So they start a fake relationship, and soon, everyone takes notice of the newest couple in school. It may have been fake, but it slowly begins to feel real. Will it lead to true love or all too real heartbreak?

I quite liked my first-ever Meagan Brandy read! It was slow burn without getting to the point of sluggishly boring. The pace of the story allowed me to get to know Demi and Nico better, seeing who they really were behind her sunny veneer and his surly attitude. My heart ached for how badly these two had it in terms of their home lives and having divorced parents who were absentees--although Demi's dad wasn't all that bad--but they did luck it when it came to the friends they chose to surround themselves with, becoming their support systems. There was a lot to love about the story, although I confess that the twist regarding Nico and Alex Hammons gave me pause because it seemed almost impossible that no one other than Nico's best friend knew what was going on. That aside, Fake It 'Til You Break It was a mature young adult romance that checked off almost all my boxes. Four stars! ♥

Purchase Fake It 'Til You Break It on Amazon.