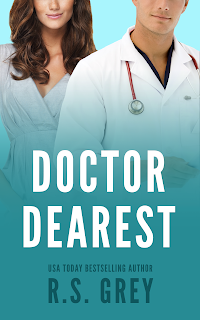 I had a song running in my head by the time I was done reading R.S. Grey's latest humdinger of a romance novel, so allow me to quote a few of the lines: "Doctor Doctor, gimme the news; I got a bad case of lovin' you; No pill's gonna cure my ill; I got a bad case of lovin' you". It's from "Bad Case of Loving You", specifically the 1979 version sung by Robert Palmer. It's fitting for Grey's book because Doctor Dearest is about not just one but two doctors who are its main characters, as well as having a self-diagnosed, very incurable, not-so-bad case of loving this book.

At twenty-eight, Natalie Martin is younger than most to have graduated from her residency, but she's a gifted doctor and excited to pursue her fellowship in pediatric burns surgery at Beacon Hill University Medical Branch. She's independent and focused on her career, but her older brother, Noah, remains protective of her--so protective, in fact, that he's asked his best friend to keep an eye on Natalie while Noah is on sabbatical. It wouldn't have been a problem if Natalie didn't have a total crush on said best friend, who also happens to work at BHUMB.

There's a reason why thirty-six-year-old Connor Easton is considered to be as in-demand of a surgeon as he is. The former college football quarterback turned attending surgeon in the plastics department is good with his hands. He'd love nothing more than show Natalie just how good those hands would feel, but he's behaved himself. With Noah going out of town and Connor moving on temporarily while his townhouse is renovated, he'll be in closer proximity to the woman he's always wanted. Can he convince her to want more than a one-time thing with him?

For about the first half of the book, there was a lot of push and pull between Natalie and Connor, and I understood why taking that step towards something beyond being tied together by their connection to Noah was a difficult one to take. The chemistry was a clear and present danger, and I say "danger" because these two were combustible and whenever they would deny themselves being with each other, it became dangerous to their mental, emotional, and sexual health. Tension was high and palpable and had me eagerly cheering these two on.

I adored the main characters, and the pacing was good and steady for the most part, although I will admit that there were times where I just wanted to drag these two into a room, lock the door, and order them to get on with it already! Gah! But hey, I've never been known for my patience. This was a fun read, and one that provided me with a couple of hours of entertainment but stayed with me long after. I've got my fingers crossed for a book with Dr. Noah Martin and Dr. Lindsey Brooks (Natalie's bestie) in the near future! I'm giving 4.5 stars to Doctor Dearest. ♥