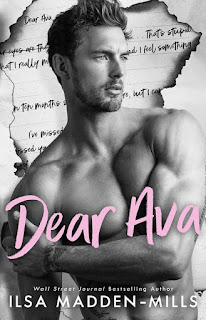 Give me a minute.

To catch up with you.

All my previous favorite Ilsa Madden-Mills reads have been knocked down a notch by her latest standalone release, Dear Ava. This book? It. Was. Everything. At its most basic, this is a mature young adult (M-YA) bully romance, but it's also so much more than "just" that. From beginning till the end, there's this thrum that varies in terms of intensity depending on what's happening on the page, but it's there throughout. There was nothing that could have distracted me from this book once the character of Ava was introduced in the prologue. A couple of pages in, and I was already so damn invested in her story, and once her "Secret Admirer" enters the picture as well as three of the Sharks, well, slap me with the "shark bait" label because that was me with this book--hook, line, and sinker.

Ava Harris may have been known as a charity case before, but after what happened during kegger sponsored by Camden High's football team, she disappeared with ugly rumors swirling about her. After a year elsewhere, she's back for her senior year. Now, the names thrown her way are way more vicious: snitch, bitch, liar, slut. But she can't afford to care what everyone else thinks. She just needs to finish the year and ensure her younger brother has the opportunity he deserves. Gone is the Ava with the long blonde hair donning a cheerleader outfit who wanted nothing more than to be welcomed into the circle of the Sharks, the school's privileged few. She wants nothing to do with them, but one particular Shark has left her a letter making it clear that he wants her. Only her.

Ah, this book. I wish had adequate words to explain why this novel is as awe-inspiring as it is and why I'm as moved and impressed by it as I am. Ava truly is the soul of this book. After everything she went through, what came out of it was this young woman who was courageous and driven yet remained sensitive and forgiving to those who deserved it when all was said and done. Her "Secret Admirer", on the other hand, was the heart of this story. I've debated on whether I should mention his name or not, but since it wasn't mentioned in the blurb, I'm going to hold off. Suffice it to say that if Ava is the "inspiring", then SA is the "awe" in the "awe-inspiring" tag I gave this book. Ilsa Madden-Mills didn't take the easy route telling their story, but it's the hard-fought-for happy endings that are the most memorable, and theirs certainly was that. I cannot recommend Dear Ava enough. Five-plus stars. ♥