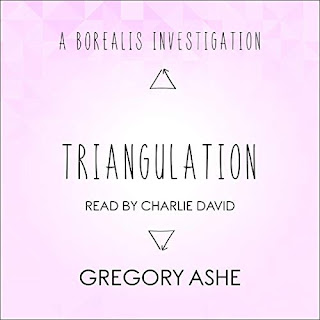 Note: An advanced reader copy (ARC) was provided by the author via LesCourt Audio Review Team.

Don't you just love it when an audiobook exceeds the lofty bar you've set for it? I already knew going into Triangulation that Gregory Ashe was going to knock the story out of the park, but I'm thrilled beyond belief to say that Charlie David impressed me with his narration in this second book in the Borealis Investigations series. I'm going to highly recommend that you listen to the series in order because you'll have a better understanding of the history between the main characters as well as the development of their relationship--the whole stop and start of it--plus there's the continuing story arc involving a life-changing incident that continues to haunt them. The series is three books in, although at the moment, there are only two audiobooks available, which is why I've got my fingers crossed that the third one will be released REALLY soon.

There's no rest for the weary, which is why North McKinney and Shaw Aldrich are on to their next case. If being busy means not having the time or energy to tackle their feelings for each other, well, then that's just the way it goes. The search for Shep Collins, a prominent figure in the LGBTQIA community who runs a halfway house for LGBTQIA youth needs to be their top priority. As they uncover the dark and dirty secrets that Shep's kept hidden, he's found--dead in the very halfway house he runs. From a missing person, Shep is now a murder victim, and the search switches from finding him to finding his killer. This puts North and Shaw at odds with the police who, naturally, are doing their own investigation. When there appears to be ties between their case and the West End Slasher, aka the serial killer that Shaw barely survived, Will Shaw and North survive the onslaught of everything coming at them and will they end up with more questions than answers?

Goodness me, but everything has leveled up with this audiobook! I was in serious like with North and Shaw and loved Gregory Ashe's writing, but this time around, I'm in doubly serious love with North and Shaw and in awe with Ashe's writing. North and Shaw have tension and then some and darn it, but how delicious that tension was. The romance was heightened and the mystery and suspense was exemplary. With the expected comes the unexpected, and this is where I need to mention that I quite liked Charlie David's narration here. There was more oomph with his performance, making for a better overall listening experience. Four stars for narration, five for story, so an average of 4.5 stars for Triangulation! ♥