Audiobook Blitz: The Prince and His Bedeviled Bodyguard by Charlie Cochet, narrated by Greg Boudreaux About The Prince and His Bedeviled Bodyguard
Prince Owin
Being a fierce predator—not at all adorable, despite my graceful stature—the last thing I needed was a bodyguard. Especially a wolf shifter, whose presence alone was an insult to my princely principles. As Prince of the Ocelot Shifters, I prided myself on my infallible feline instincts, uncompromisable dignity, and flawless fashion sense. If having a canine follow me around at all times wasn’t bad enough, I now faced the most important moment of my entire life. The time had come to prove I was worthy of my crown. If only I could find a way to get rid of the pesky bodyguard.

Grimmwolf
When the King of All Shifters asked me to guard Prince Owin, I admit I had no idea what to expect. Cat shifters tend to be a little intense, not to mention kinda cranky. Owin was no exception, though he seemed crankier than most. Being his bodyguard was proving to be one of the greatest challenges of my life—but not nearly as great as convincing him there was something special between us. When Owin is faced with a perilous quest to prove his worth, I was determined to keep him safe, even if the same couldn’t be said of my heart.

Read my five-starred review of The Prince and His Bedeviled Bodyguard.

Add The Prince and His Bedeviled Bodyguard on Goodreads. 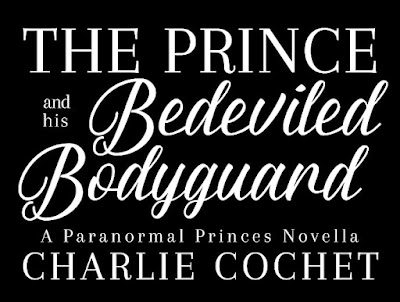