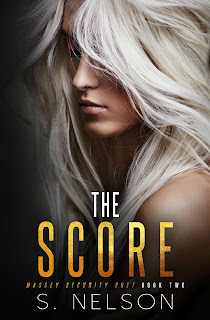 The Score is the continuation of the story that ended with one heck of a cliffhanger in The Assignment, both books belonging to the Massey Security duet from S. Nelson. Readers needed answers, and answers are exactly what we get in this conclusion. Fair warning: I may end up mentioning things here that could turn out to be spoilery for those of you who have yet to read the first book. Moving on... Last we saw Cara Dessoye and Ford Massey, she had been abducted and he...well, let's just say that he wasn't where I expected him to be. Now, Cara's forced to face certain truths and accept the harsh reality of the situation she and her family are in. Trusting Ford with her safety is one thing; entrusting him with her heart is a whole 'nother matter. Cara has a secret that she's kept for fourteen years, one she's never shared, not even with her sister, Emily. But maybe, just maybe, she can share it with Ford. The question is, once it's out there, what will happen next, and when everything's been said, will they be...done?

After that cliffhanger ending in the first book, I was on pins and needles once I had this second book in my hands. I seriously needed to know what the heck happened to Cara and Ford, and talk about getting book two off to a great start. I liked that we get a deeper look at Cara, especially when it came to what she was keeping because it allowed readers to have a far better understanding of why she was acting the way that she was. Does that wholly excuse her bad behavior? No, but it allows for more empathy, and the more the layers were peeled away from the persona that Cara had, the easier it was to actually have some affection for the far more vulnerable but still feisty woman that we discover here. Ford was still very much the Ford that he was in the first book, although the guy did loosen up more here. Emily Dessoye and Owen Massey's own romance played in the background and that had it's own bit of surprise as well. Overall, The Score tied any loose ends rather nicely, and it receives four out of five stars. ♥

Read my reviews for the Massey Security series:

The Assignment (book one) - four stars - My Review

The Score (book two) - four stars - My Review (posted above)