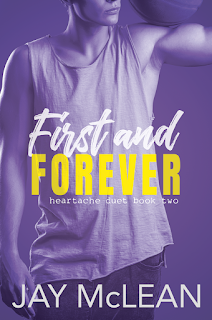 He shakes his head, eyes on mine as he lowers my hands again. “Of course you deserve this. You're my girl, Ava. My first and forever.”


Jay McLean's Heartache duet should have come with a warning label on it: Tissues are a must! There were tears during the first novel, Heartache and Hope, but boy, oh boy, the waterworks were in overdrive with this second one. First and Forever is the conclusion to Connor Ledger and Ava Diaz's love story, and while book one may have had a heartrending end to it and book two has a far happier ending, suffice it to say that these two have a whole slew of hurdles--especially ones they've created themselves--that they'll have to get over before they do get there.

Ava Diaz broke Connor Ledger's heart alongside her own, but what choice did she really have? With seemingly the weight of the world on her shoulders, she needed to prioritize what she believed was best for her family. As much as she loved Connor, her mother needed to come first. The thing is, Connor hasn't given up because through the heartache, he's still looking for inklings of hope. Ava may have made her choice, but he's keeping his eye on the ball and has known what his new end game is ever since Ava came along. Who says basketball and love can't mix?

This book! This duet! GAH! I doubt that I can ever come up with a review befitting First and Forever, and you can pretty much tell I suffered through the same fate when I wrote my review for Heartache and Hope. I mean, how the heck do you put into words all the feelings and thoughts swirling around in my head and heart?! And that's the thing: the feels! I needed tissues, because while I was teary-eyed and there were a couple of tears that broke free with book one, this sequel had me full-on emoting. Talk about a roller coaster of emotions, and I happily hung on.

Can I just say that one of the extra benefits to reading this in eBook format was that I could highlight to my heart's content without worrying about making it look messy? There were countless quotable quotes, and not just from Ava and Connor but from several supporting characters, particularly Ava's mom. Speaking of Mama Jo, she was not only a source of wisdom--and maybe even a basketball tip for Connor--but there were pivotal moments in the book that involved her that had me wiping away the tears with one hand while clutching on to my tablet with the other.

This book may only be my third read from Jay McLean but it's a reminder that I've been missing out, and it's an oversight that I fully intend to rectify. Her writing is in a class all her own and while she may not be as prolific as a host of other authors out there, I'd like to think that she makes the wait in between books worthwhile. Connor and Ava's story has angst and heaviness, but at the end of the day, it's a reminder that while true love doesn't conquer all, it finds a way to prevail in the end. Five-plus stars for First and Forever. Ava says, "Boo!"; I say, "Boo-effin'-yah!" ♥

Read my reviews for the Heartache series:

Heartache and Hope (book one) - five-plus stars - My Review

Purchase First and Forever on Amazon.