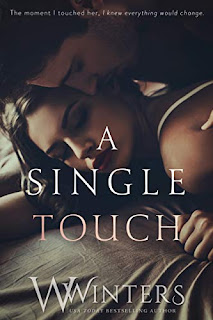 “You want to know why I want you?” she questions me as I grip her ass, one cheek in each hand and pull her up to me before stepping into the shower with her.

The warm water flows over my skin and it feels like heaven. Being cleansed and still having her in my grasp must be what heaven is like.

“Why?” I groan the word in the crook of her neck and then let my teeth drag down her sin, just to feel her squirm.

I have been waiting for this book for what feels like forever (patience is something I'm not really known for, but the wait was actually less than two months...so yeah, forever!), and now that I'm done reading it, I want to start the Irresistible Attraction trilogy all over again! A Single Touch is the third and final novel in the series, and dare I say that I wouldn't be surprised if all three books end up on several top or favorite reads by year's end. Just a quick reminder: these novels MUST be read in order because they ARE interconnected and books one and two end in cliffhangers--A Single Glance is the series starter, followed by A Single Kiss, and it all concludes with A Single Touch.

Things are coming to a head for Bethany Fawn and Jase Cross. She wants answers and Jase, well, he simply isn't as forthcoming as Bethany wishes he were. He does, however, has his reasons for his actions, and the last thing he wants is to lose his fiery girl because of it. They're under each other's skin, and even after everything that's been said and done on both ends, there's no one one else either of them would choose to be with. Even if Bethany decides to run, she knows Jase will find her. That's how connected they are--how drawn to one another they've become. But with so much up in the air between them and trust at an all-time low, will the answers come too late? And with his enemies still a threat, what'll it take for Jase to get his revenge while also keeping his cailín tine safe?

With this being the third novel in the series, I was already absolutely invested in all things Jase and Bethany. I needed these two to get their happily-ever-after, especially after everything that they had already been through. Goodness, but how these two had the whole push and pull thing going on, yet there was never anything contrived about the whole thing. They challenged each other because they expected--demanded and deserved--better since it was obvious that what they had was extraordinary. Yeah, theirs wasn't the sort of love story that had to do with the usual romantic trimmings, but it was enticing, intense, and life-altering. I love that they took the good with the not-so-good because the whole changing for someone doesn't always turn work. The romance and suspense and everything between was superb, and W. Winters is now one of my go-to authors. Five-plus stars for A Single Touch. ♥

Read my reviews for the Irresistible Attraction series:

A Single Glance (book one) - five stars - My Review