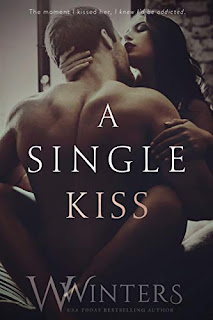 “I don't love you.” She shakes her head as the statement leaves her. Her body consciously denying the very words she speaks.

Oh. Wow. This book was a double dose of awesomeness! I mean, the first Irresistible Attraction novel, A Single Glance, was fantastic, but this second one felt as if W. Winters doubled down one the romance and the suspense and everything in between. The wait between the series starter and A Single Kiss was just a little over two months, and while that isn't necessarily short--it felt like forever to me, but then, a couple of weeks would have felt that way to me as well--Winters made sure that the wait would be worthwhile by rewarding readers for their patience with a kickass story and the relationship between the main characters has reached scorching levels even as both Jase Cross and Bethany Fawn struggle with the discoveries they've made and the doubts that continue to swirl around them. Basically, this book is a must-read, but you need to read the series in order, and yes, it ends in a cliffy.

Jase Cross and Bethany Fawn have an agreement, one involving a mode of payment for the debt incurred by Bethany's sister, Jenny. But things are shifting and feelings are now encroaching on what should have been nothing more than transactional. As both Jase and Bethany try to uncover certain things and unearth various clues, the fragile trust they've established is on shaky ground. She knows falling for the man she considers her enemy--and someone who may have been behind what happened to her sister--is wrong and could cost her more than her heart, both her body and heart already belong to Jase. The question is, do they have any sort of future together?

I know I've got a whole lot of catching up to do with as far as the book universe that the Cross brothers belong to is concerned because based on the two Irresistible Attraction books alone, I've been missing out. A LOT. This second part to Jase and Bethany's story had me anxious throughout. They were keeping things from each other, things that would definitely affect the relationship that they were in. The suspense may not have killed me, but just like the romance, I couldn't get enough of it. W. Winters has paced this series so well, giving her readers just enough for each book, making sure to sate us momentarily but also ensuring she whets our appetite for even more from Jase and Bethany. A Single Kiss receives five-plus stars, and here's to hoping book three is just as good, if not better. ♥

Read my reviews for the Irresistible Attraction series:

A Single Glance (book one) - five stars - My Review