Review: Seven Shades of You by A.M. Johnson (Twin Hearts #2) 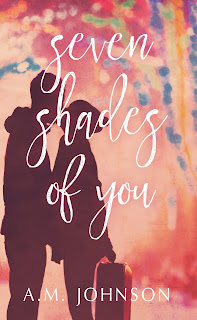 I'd kissed him. I'd kissed Kai and it was every shade of red. Red velvet. Burgundy. Cherry. Candy apple. Crimson. Cardinal. Fire engine. Pillar box. I wanted to keep kissing him, keep moving forward. Uncover unknown shades. Create our own. Keep touching until his heart raced again, until it kept pace with mine. Until the tips of his fingers, barely resting on my stomach, became the flat plane of his palm searching for more of my skin. Until the ache inside me pulsed. Until I asked him to relieve it.


I honestly thought I was prepared for what lay in waiting for me. The angst, the emotions, the subtle intensity of it all. But I should have known A.M. Johnson was going to put my heart through the wringer once again and if I had thought this author had one hell of a knack for writing the sort of love stories that resonated most with me, she proved to me wrong. No, what she has isn't "just" a knack for writing; what she's blessed with is a gift to weave the sort of stories whose threads wrap around your heart, your mind, and your soul. She doesn't give her characters an ordinary happily-ever-after; she makes them earn it so that they don't take it for granted--making it extraordinary.

While Seven Shades of You, the much-anticipated second novel in her Twin Hearts duet, was indeed a romance, it was more. It was an honest-to-goodness love story of which romance is only a part of the whole. There is nothing simple about Kai Carter and Indigo O'Connell, whether it be their back stories or their relationship. His mother is dying and all his plans seem to be falling to the wayside; she's bipolar with psychotic features and struggles to be in her twin brother's far brighter shadow. But don't assume that either of them are weak. Yes, they have weaknesses, and yes, they falter at times, but they are undoubtedly two of the strongest main characters I've ever come across.

It would be so easy to slap a label of "falling for your best friend's sibling" or "falling for your sibling's best friend" on this book and call it a day. However, just like the labels that have been placed on Kai and Indie, as well as Royal O'Connell and Camden Morgan (Let There Be Light) before them, there's more to Seven Shades of You than that. Kai barely acknowledged Indie's presence in book one, so here, the two nurture a friendship even as they remain mum over their respective crushes on each other prior to even actually having a conversation. Nothing is rushed but it isn't necessarily a slow burn either. It felt...real, and rooted in a universal truth, if that even makes any sense.

I mentioned in my review for Let There Be Light that A.M. Johnson had a lyricism to her writing, but allow me to amend that. Johnson is poetic in her prose, with a cadence that doesn't make her story or characters sound trite. She doesn't shy away from complexities in either the tale she tells or the men and women her readers can't help but become emotionally invested in and connected to. I love that she doesn't seem to underestimate her reader, that she believes and trusts that we won't merely wrap our heads around it all but embrace it and possibly even become empowered by it. Seven Shades of You is a novel to be experienced and is one of the best out there, whether it be prior to 2019 or even beyond. Five-plus stars could never be enough for a love story this impeccable. ♥

Read my reviews for the Twin Hearts series:

Let There Be Light (book one) - five-plus stars - My Review

Purchase Seven Shades of You on Amazon.