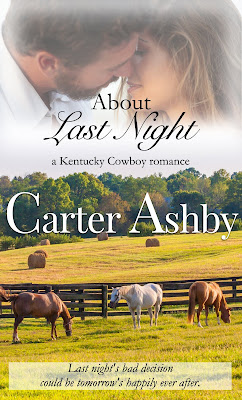 About About Last Night
Newly divorced Tessa Hunt is determined that last night’s bad decision is both the first and last of its kind. Unfortunately, that bad decision wears a cowboy hat, has a killer smile, and somehow managed to undo years of damage to her ego in just one night. She’s more than tempted to keep him in mind for future rendezvous, but in her heart, she knows better. After all, he’s just a playboy like her ex, and definitely no good for a serious relationship.

Cooper Dean’s night with Tessa is a wake-up call. Holding her had felt different. Not like a one-night stand at all. And while he wants to see more of her, he knows he has to get his life together first. That means coming to terms with his grief over the loss of his wife, and rising to the challenge of fatherhood. His first task as a single father is to take his son to the first day of Kindergarten. Seems simple enough, until he finds out that his son’s teacher is none other than the lovely Tessa Hunt.

Now, the two neighbors are finding common ground in their concern for Cooper's children and their attraction to each other. But can Tessa open herself to trust again? Can this cowboy widower let go of his past and embrace the future with a new love? 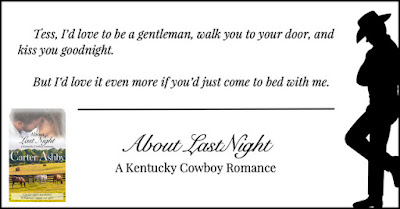 Read my four-starred review of About Last Night.

Add About Last Night on Goodreads. 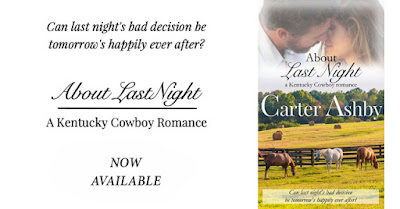 An Excerpt from About Last Night
He lowered his eyes, suddenly aware he was half-drunk and mostly naked at ten thirty in the morning. “Maybe I could take you to dinner.”

She snorted. “Don’t do me any favors. Let’s just go back to the way things were and pretend we don’t know each other.”

He looked back up. Was she serious? Last night was the best sex he’d had in ages. She’d been all over him like an animal; he could barely keep up. Maybe he’d failed to impress her. She was a little older than him. Maybe she had higher expectations than the college girls he usual landed in bed with. Still, he wasn’t one to beg. Not much, anyway. “Come on, Tess, what did I do wrong?”

“Nothing. You did nothing wrong. I’m just…just embarrassed and ashamed, and I want you out of my sight so I can pretend like it didn’t happen.”

With a sigh, he stepped backward toward the door. “Tell you what. I’m gonna get sober, get dressed, and then ask you out proper-like, okay?”

“What is this?” she asked. “You feel sorry for me or something?”

“I don’t need you to fix this. Last night wasn’t your fault. You were just behaving according to your nature. I’m the one who did something stupid.”

His confusion suddenly took a back seat to anger. “You keep talking about me like I’m too dumb to understand what you’re saying. I got feelings, too, you know.”

She actually snorted before turning back to her coffee pot to fill the mug she’d been holding. “Sure you do, cowboy. You and your feelings need to get the hell out of my house.”

“You know, some women are actually happy after a night with me.”

“Well, then, maybe your time would be better spent finding one of them.”

Fine. What was the point arguing with her when she was so all-fired determined to dislike him? “Maybe I will. I’ve got plenty of options. Plenty.”

“You should be. I’m talking tall, stacked, gorgeous young women.”

She slammed her mug on the counter, coffee splashing out, and spun to face him, this time with tears welling in her eyes. “Then go! I cannot imagine why you’re standing here bothering me when you clearly have better things on the horizon. Just go!”

“Fine! I’m going. And hey, keep that damn dog of yours on your side of the yard.”

“Leave Clark out of it. He never did anything to you.”

Cooper slammed the door behind him. He’d been living in companionable silence next door to that woman for nine months, now. They didn’t speak much, but sometimes he’d mow her lawn for her, or she’d pick up his mail for him and set it inside his screen door. It had been nice. Polite. But now, well, she could mow her own lawn and see how she liked dodging the piles of crap Clark left all over.

He took his beer to his room, and before he fully realized what he was doing, he started unstacking the boxes in the corner until he came to the one marked, keepsakes written in his mother-in-law’s handwriting. He ripped the tape off and opened the box. He set his beer on the floor and began digging through the contents, a mishmash of items from jewelry to letters to photos. And then he pulled out a framed photo. He collapsed against the wall and held it in one hand while he reclaimed his beer.

Kirsten had been his first everything. First kiss, first partner, first love. In the photo, she was smiling, several months pregnant. She was staring up at a handsome young man who had never slept with anyone but her, and who never got drunk to numb his feelings, and who couldn’t wait to take on the responsibilities of fatherhood—a young man who was gainfully employed and took pride in his work. A young man Cooper never saw anymore when he looked in the mirror. No, what he saw in the mirror was exactly what Tess saw…a bum. A young, irresponsible, drunken bum.

The photo was beginning to blur as Cooper's eyes stung with unshed tears. “If I knew how to get back to that I would,” he murmured.

He kissed the photo, crawled into bed, and fell asleep with the empty bottle in one hand and the photo in the other. 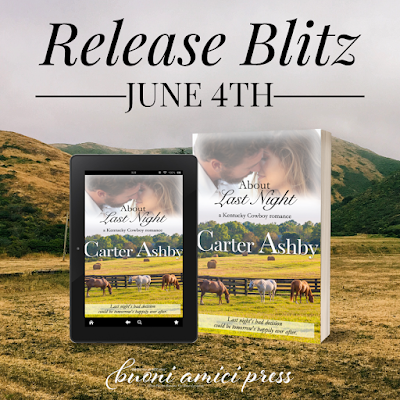 About Carter Ashby
Carter Ashby lives in Missouri with her three kids and two dogs. When she’s not working, or raising children, she enjoys writing real, romantic, and slightly naughty stories. 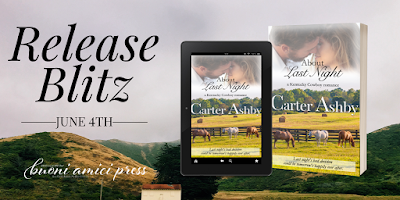