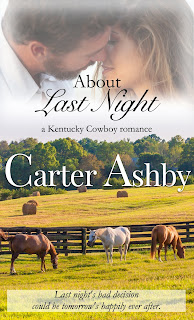 About Last Night is the first novel in Carter Ashby's new series, Kentucky Cowboys, and it's a story about loss and learning how to live and love again. Thirty-four-year-old Tessa Hunt has been divorced for eighteen months but that doesn't mean that she's cut ties with her cheating ex-husband. They still own property together, and in order for Tessa to be able to properly care for her beloved horse and find a more suitable home for them, she needs to get her ex to agree to sell their house and land for lower than they'd originally put it up for. For now, Tessa lives in an apartment, and she happens to live next door to a hot, younger man who seems to have nothing better to do than threaten her elderly dog, drink alcohol, and sleep with a variety of women. So, imagine her surprise when she ends up sleeping with her twenty-seven-year-old neighbor, Cooper Dean, and finds out that he's a widower with two children--one of whom happens to be her student--who currently live with his in-laws, that he's a horse whisperer of sorts, has two lifelong best friends, and that he's still in love and mourning the wife he lost two years ago. There's a whole lot more to Cooper than meets the eye, and whether Tessa wants to admit it or not, she wants to know his story. The question is: Will Tessa be a part of the rest of Cooper's story or just a short chapter?

I have a thing for angst, and that's something that's not necessarily some long-held secret, not if you're familiar with my reviews. Tessa and Cooper's story had quite a bit of angst, and that includes their respective back stories, what with Tessa's cheating ex and her less than stellar image of herself and Cooper unexpectedly losing his wife, Kirsten, and everything that followed her passing. These two had a definite connection going on, but even though they did share one night together at the beginning of the book, that doesn't mean that everything clicked into place and was smooth sailing. Nope, Tessa and Cooper had their struggles and they certainly had issues that they needed to contend with, a lot of which had to do with their own fears and doubts. Plus, they'd been neighbors for months before they even hopped into bed together, so if anything, what we have here is a slow burn romance, and it was one that had my attention from start to finish. The story itself had a pretty good flow to it, and the supporting characters were rather interesting, particularly Cooper's best friends, both of whom I'm guessing will make up the rest of the series (although I could be wrong!). Overall, I appreciated the tale that Carter Ashby put together and it is a strong beginning for what looks to be a highly promising series. Four stars for About Last Night. ♥

Purchase About Last Night on Amazon.