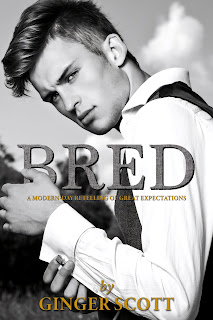 
My eyes are heavy. My heart is weak. I'm out of things to say.

She broke him. And now she's going to die and leave him this way.

When a classic piece of literature is given a modern-day retelling, there's always a fair amount of anxiousness and excitement. After all, not all stories transition well from one point in time to another and with a change in setting, the possibility is always there that something gets lost in translation (and no, I'm not talking about translation in terms of language, although yeah, that's been known to happen as well). So, when I found out that Ginger Scott was going to be do a modern retelling of one of English literature's most famous works, Charles Dickens's Great Expectations, I looked forward to seeing how she would put her own creative touch to the heartrending yet hopeful story while also remaining faithful to the spirit of the original piece. And I, for one, was not disappointed.

Recently orphaned Lily Ames is adjusting to life without her parents and under the guardianship of distant relatives. Life has gone on as it should, but when she steps into the home of Elena Alderman, her life changes once again. Elena is a woman who gets what she wants and reigns supreme over those around her. She is cold and calculating, willing to manipulate whomever and whatever in order to get her way. Her adopted son, Henry, knows only what he has seen, so his arrogance isn't too much of a surprise for Lily, yet she is drawn to him as much as she is to the beautiful piano inside the Alderman abode. Her life would soon revolve around her love for playing music on this revered instrument and the striking boy who holds her heart captive, but as much as she dreams of what it would be like to have everything she wishes for, Elena has no plans of allowing Lily and Henry any happy endings.

Ginger Scott did the near impossible--she's spun a tale that strikes a familiar chord while making it her own as well. This isn't your typical retelling in that there remains this feeling of nostalgia, as if you know it isn't set a century and a half ago but it doesn't fall victim to the overly modernized feel of today's society. I know it sounds strange, but I loved that Scott's written this book the way she has because it has a timeless air to it...like that of a modern classic. I know how gifted of an author Scott is, but she's pushed her own boundaries and taken a risk that, as far as I'm concerned, paid off. Lily and Henry's story is one that resonated with me, even though they're decades younger than I am, just like Dickens's Great Expectations did each time I perused it. Bred is not to be missed. Five-plus stars. ♥