Review: The Trouble with Gravity by K.K. Allen (Gravity #3) 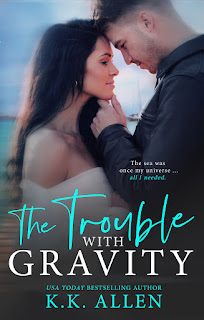 K.K. Allen is back with the third full-length novel in her Gravity series. The Trouble with Gravity is a slow-burn romance about a dancer and a pianist slash composer slash producer who clash and push each other's buttons while trying to keep their swirling emotions and undeniable attraction at bay. Kai Kalani Ashley is a twenty-eight-year-old dancer with a natural grace who is up for the lead role in a unique sort of dance-only musical. She desperately needs to land this job if she has any hopes of keeping up with her bills and student loans. Thirty-year-old Sebastian Chase is one of the two creators behind Angst and Grace, and as much as this show means to him, he's counting the days, weeks, and months before it can finally close, which will mean he can be rid of the bane of his existence. Kai and Sebastian need each other to make this musical a success, but Kai's fear of being on the water is in direct conflict with a production that will staged on a cruise ship for seven months. Add to that Sebastian's past which seems to have cast him adrift. Being together may have been the feeling as if they're flying, but the trouble with gravity and all their issues lingering between them is that it could have them totally crashing.

This was a great enemies-to-friends-to-lovers read with a whole lot of slow burn going on, although not so slow that it veered into boredom territory. Kai and Sebastian have things in their past that they've yet to deal with--Kai with what happened to her beloved father and Sebastian with what happened between one person he entrusted with his heart and another person he entrusted his dream with--and it causes quite a lot of stops and starts in their relationship. I loved the complexities in their personalities and in what they're trying to build professionally and personally. See, that's the thing--they unknowingly became partners with a couple of common goals. As always, K.K. Allen did an awesome job keeping this story moving forward and without getting lost while on the way to a happily-ever-after. I liked that her main characters weren't overly simplistic nor too mired in drama, and the cast of characters were interesting but never stole the attention. Overall, The Trouble with Gravity was a 4.5-starred read. ♥

Read my reviews for the Gravity series:

Center of Gravity (book one) - four stars - My Review

The Trouble with Gravity (book three) - 4.5 stars - My Review (posted above)

Purchase The Trouble with Gravity on Amazon.