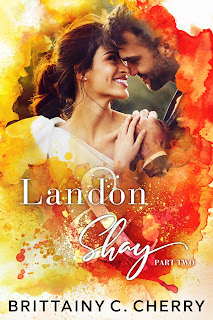 I've been really eager to get my hands on the sequel to the first part of Landon & Shay, and my expectations were quite high considering how amazing a read book one was. Part two picks up soon after the events of its predecessor, with Shay Gable and Landon Harrison apart due to physical distance, but with a commitment made to each other that echoed just how much they loved each other--twice over. Shay has gone on to college and Landon's path has taken him to the far brighter lights of modeling and acting. Their love, however, can withstand almost anything...until they're twenty and one loss leads Landon to walk away from what they have, breaking both their hearts in the process. Over the next decade, they lead separate lives, but when an important event in their hometown has them both attending, could it be Landon's chance at absolution or will it be Shay's shot at closure?

Here's the thing: Brittainy C. Cherry is one of my favorite go-to authors. I love how she's able to weave the sort of stories that tug at my heartstrings and leaves me feeling inspired by what I just read, as was the case with the first part of the duet. With this second part, however, the pacing of the story was rather slow for about the first half, and then when Shay and Landon see each other again after all those years apart, it's as if someone pressed "fast forward". The second half was rushed, to the point where it was like bits and pieces were skipped over in between chapters. The version I read is an advanced reader copy (ARC), and the ending there was rather abrupt, and to be honest, not all that satisfying. The published version includes an epilogue that pretty much wrapped everything up nicely with a heart-shaped bow on it. While not as good as part one, Landon & Shay: Part Two still gets four stars. ♥

Read my reviews for the L&S duet:

Landon & Shay: Part One (book one) - five-plus stars - My Review